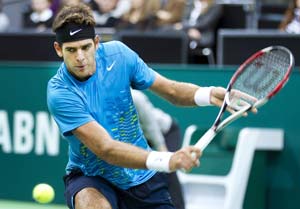 Top seed Juan Martin del Potro survived a stiff test to beat Marcos Baghdatis 4-6, 6-4, 6-3 in the first round of the Japan Open on Tuesday while defending champion Kei Nishikori flirted with disaster before squeaking through.

Nishikori, who became the host country's first winner of the $1.43 million event last year, had to dig deep to overcome Austria's Jurgen Melzer 6-7, 7-5, 6-2 under a closed roof in rainswept Tokyo.

But the giant Argentine shook off the cobwebs and the effects of a 37-hour flight to the Far East with some typically meaty hitting after dropping the first set.

The world number seven, a finalist in Tokyo in 2008, secured the crucial break in game eight of the decider after a period of sustained pressure on the Baghdatis serve.

Del Potro closed out the match with a thunderous forehand down the line to win in a shade over two hours.

But Baghdatis, runner-up to Roger Federer in the 2006 Australian Open final, made del Potro sweat, firing 17 aces, several of them to fend off break points.

"He's unseeded. Nobody wants to play him early in the tournament. He plays very well on hard courts and indoors -- the conditions we had today.

"He served well and hit a lot of aces. But I played well in the important moments. I feel ready to go far in the tournament."

Del Potro, who next faces fellow Argentine Carlos Berlocq, heads the field in the absence of Wimbledon champion Andy Murray, who pulled out to undergo minor back surgery. 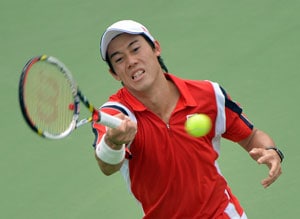 Fourth seed Nishikori extended his win streak on the Ariake centre court to nine in Japan Open and Davis Cup competition but did it the hard way, forced to come back from a set and a break down against the left-handed Melzer.

In a hole after losing the first-set tiebreak 7-4 and on the brink of elimination at 5-2 down, Nishikori battled back superbly and closed out the victory with his 11th ace after two hours and seven minutes.

"There were a few dangerous moments for me so I'm glad to come through," said the world number 13, who will play Spain's Feliciano Lopez in the last 16.

"As the defending champion it was good to pull out the win under pressure like that."

Fifth-seeded Frenchman Gilles Simon, who beat fellow Frenchman Jo-Wilfried Tsonga to win his first title of the year in Metz last week, pulled out of his first-round match against Spain's Marcel Granollers with a groin strain.

Second seed Tsonga, the 2009 Tokyo champion, safely negotiated his way into the second round on Monday with a straight-sets win over compatriot Gael Monfils.

Comments
Topics mentioned in this article
Tennis Kei Nishikori Juan Martin del Potro
Get the latest updates on ICC T20 Worldcup 2022 and CWG 2022 check out the Schedule, Live Score and Medals Tally. Like us on Facebook or follow us on Twitter for more sports updates. You can also download the NDTV Cricket app for Android or iOS.