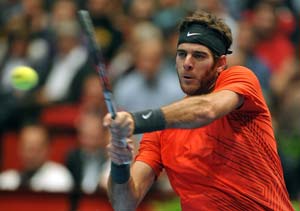 Del Potro swept away his opponent in the first set and denied him any break points as he secured a 6-0, 6-4 win Thursday in the round robin stage of the season-ending tournament.

"I'm glad to beat Janko tonight," del Potro said on the ATP website, adding that he had improved his game since losing to Spain's David Ferrer in his first match.

"I play much better than my first match here. A win in two sets gives me a chance to go to the next match."

Tipsarevic was eliminated in the round robin for the second year in a row at the Tour Finals and will play Ferrer in his last round robin match.

"I feel sorry that I don't play my best tennis here in London, which is probably the best event of the year," Tipsarevic said, adding that he would try hard to end the season on a high by beating Ferrer.

Comments
Topics mentioned in this article
Juan Martin del Potro Janko Tipsarevic Tennis
Get the latest updates on IPL 2021, IPL Points Table , IPL Schedule 2021 , live score . Like us on Facebook or follow us on Twitter for more sports updates. You can also download the NDTV Cricket app for Android or iOS.