Top-seeded John Isner won his third straight title in the state where he once starred at university, cruising past the fifth-seeded Cypriot whose movement was increasingly limited as the match wore on by what appeared to be hip or leg trouble. 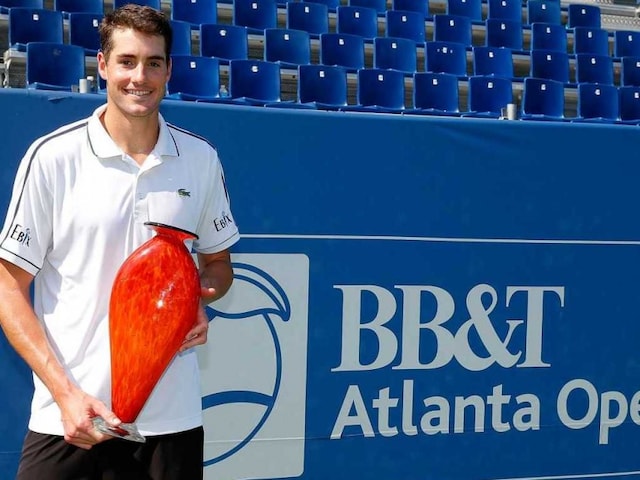 Isner completed his Atlanta ATP hat-trick with a 6-3, 6-3 victory over Baghdatis© AFP
Atlanta:

Top-seeded Isner won his third straight title in the state where he once starred at university, cruising past the fifth-seeded Cypriot whose movement was increasingly limited as the match wore on by what appeared to be hip or leg trouble. (Nadal Exacts Fognini Revenge in Hamburg Final)

"It's unfortunate you couldn't be 100 percent today," Isner told Baghdatis at the trophy presentation. "I didn't want to win like that. You're a class act and I enjoyed playing you today."

Isner, who hadn't reached a final since winning in Atlanta last year, said he felt stronger as the match wore on.

But he admitted that playing an injured opponent was tricky.

"I just needed to keep trying to play aggressive and go for my shots. I felt like I did that out there, for the most part," said Isner, who heads to Washington this week for another hardcourt tournament on the road to the US Open.

Baghdatis, seeking a first title since 2010 and playing in his first final since 2011, surrendered an early break in the opening set and never had a chance of regaining it as Isner lost just one point on his serve in the first frame.

It was more of the same in the second, when Isner broke for a 3-2 lead, and broke again to seal the win when Baghdatis netted a forehand on match point.

"That's not the way I wanted to finish the tournament but my body couldn't handle it today," said Baghdatis, who had spent more than two hours longer on court than Isner in reaching the final.

The 30-year-old said an abductor muscle injury that has troubled him since before the Nottingham grass-court event in June flared up during the final.

"I played five matches this week," Baghdatis said. "The good thing is that it's nothing serious.

"I didn't play my best tennis this week but I'm pretty happy with my mental side, I found ways to win."

Comments
Topics mentioned in this article
John Isner Marcos Baghdatis Tennis
Get the latest Cricket news, check out the India cricket schedule, Cricket live score . Like us on Facebook or follow us on Twitter for more sports updates. You can also download the NDTV Cricket app for Android or iOS.