The US pairing of Isner and Venus Williams were set to face Spain's Fernando Verdasco and Anabel Medina Garrigues on Thursday, with the winner to progress to Saturday's final. 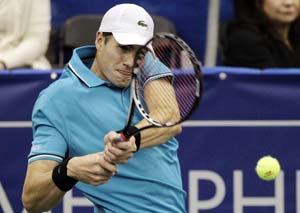 A tournament-ending knee injury to American John Isner on Thursday handed Spain a berth in this weekend's final of the Hopman Cup.

The US pairing of Isner and Venus Williams were set to face Spain's Fernando Verdasco and Anabel Medina Garrigues on Thursday, with the winner to progress to Saturday's final.

However, Isner withdrew from the tournament on Thursday morning citing a right knee problem, handing Spain a 3-0 victory and passage into the final for the sixth time.

"We are happy, of course, to be in the final," Verdasco said.

"It was going to be a difficult tie today, but when John didn't play, it is unlucky for everybody, but we are in the final and hopefully it is going to be a good day for us."

Isner looked troubled by his right knee in both his singles matches for the United States this week, losing in straight sets to South Africa's Kevin Anderson and France's Jo-Wilfried Tsonga.

Speaking after his withdrawal, the towering American said he expected to be fit for the Australian Open, starting on Monday week in Melbourne, despite being unsure of the exact nature of the injury.

"It's causing me a little bit of trouble and from that I'm not able to, to really load the right way and you know I'm not really going for my shots like I should," he said.

"I've always been a fast healer when I have had real injuries pop up here and there so I'm confident I'm going to be fine for the Australian Open."

The withdrawal of Isner, who won the event in 2011 with Bethanie Mattek-Sands, ended Venus Williams' hopes of joining her sister, Serena, as a Hopman Cup winner.

"I feel like I let her down a little bit," Isner said.

With Isner out, Verdasco found himself playing against Isner's little-known Australian hitting partner, 16-year-old Thanasi Kokkinakis, winning in straight sets despite an unexpectedly spirited showing from the youngster.

Williams then played another exhibition match against Medina Garrigues, winning 6-3, 6-4 to round out her preparation for the Australian Open in good style.

The 32-year-old won all three of her singles matches during the week and said she was happy with her form heading into the year's first Grand Slam.

Comments
Topics mentioned in this article
Tennis Spain John Isner
Get the latest updates on ICC T20 Worldcup 2022 and CWG 2022 check out the Schedule, Live Score and Medals Tally. Like us on Facebook or follow us on Twitter for more sports updates. You can also download the NDTV Cricket app for Android or iOS.