Johanna Konta Loses In Second Round of Nottingham Tournament

Johanna Konta, who entered the top 20 of the WTA rankings, suffered a second-round exit at the Nottingham tournament when she lost 4-6, 5-7 to China's Zheng Saisai 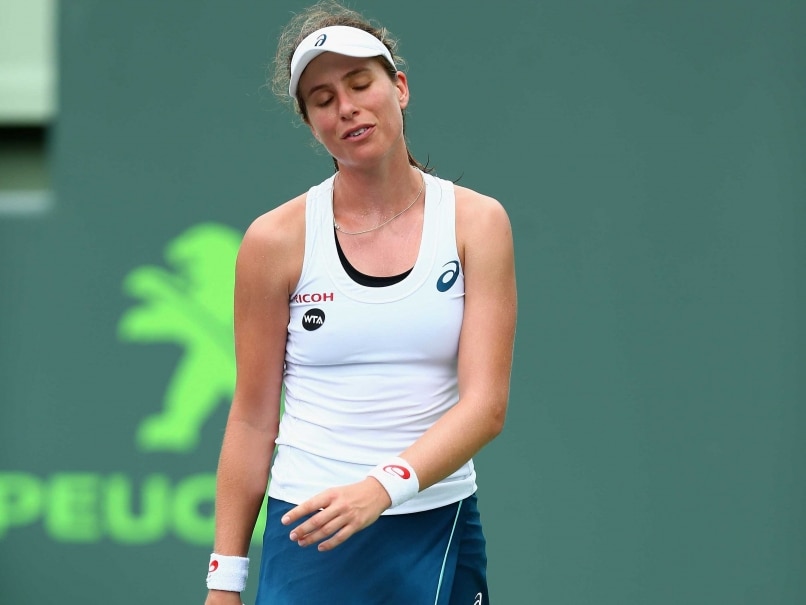 Johanna Konta's joy of breaking into the top 20 was short-lived as she suffered a second round exit in the Nottingham Open.© AFP

China's Zheng Saisai put a dampener on British favourite Johanna Konta's joy at breaking into the world's top 20 by beating her 6-4, 7-5 in the second round of the WTA Nottingham tournament on Thursday.

Konta, who this week became the first British woman since Jo Durie in 1983 to be ranked in the top 20, underwent treatment during the match after she felt a niggle in her lower back.

"I picked up a little niggle during that match, but I felt it was something I could manage," said Konta, who had won both her previous encounters with Zheng.

"That's why I thought I could finish, but I'll just be looking to take care of it and be ready for the next event.

"I wasn't distributing weight as well as I used to; if you know me well, I usually put more weight on my right side, and I wasn't able to do that today.

"Credit to her; she played a lot of balls and got a lot of balls back. I think there were a lot of high-quality points," added the 25-year-old Australia-born second seed.

Zheng, who Konta beat on the way to the Australian Open semi-finals earlier this year, showed some terrific form as she rebounded from going 2-0 down in the first set to break her opponent twice and take it in 45 minutes.

Konta looked to be on course to level the match when she went 4-2 up in the second set.

However, once again Zheng, 22, found the reserves and the spirit to fight back and kept her nerve to serve out for the match -- saving three break points to boot -- keeping alive her hopes of a first singles title on the WTA tour.

Zheng will face another Briton in the last eight after Tara Moore caused an upset of her own in beating eighth-seeded American Christina McHale 6-2, 6-2.

For Barty -- a doubles finalist in both Wimbledon and the US Open in 2013 -- it will be her first WTA quarter-final since 2014 after she took time out to play cricket.

"I really enjoyed my 18 months at home and met some really nice people through cricket," said 20-year-old Barty, who won the Wimbledon girls singles title in 2011.

"I played a season, but nothing forced me back into tennis. I just felt like it was the right time."

Comments
Topics mentioned in this article
Johanna Konta Tennis
Get the latest updates on IPL 2021, IPL Points Table , IPL Schedule 2021 , live score . Like us on Facebook or follow us on Twitter for more sports updates. You can also download the NDTV Cricket app for Android or iOS.