Capriati was inducted into the International Tennis Hall of Fame last year, but her career was overshadowed by personal problems, including incidents of shoplifting and drugs. 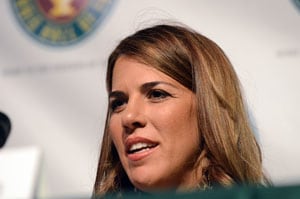 Former tennis World No. 1 Jennifer Capriati has been summoned to appear in court on April 17 to face allegations she stalked an ex-boyfriend and punched him on Valentine's Day.

Capriati was charged with stalking and with battery over an alleged incident on February 14 in which she had an altercation with Ivan Brannan at the Oxygen Health & Wellness gym in North Palm Beach, Florida, court records show.

A police report said that while Brannan was working out, 36-year-old Capriati "started screaming" at him and punched him four times in the chest "with a closed fist."

After a yoga instructor intervened, Brannan locked himself in the men's locker room and called emergency services. He told police Capriati had been harassing him since they broke up in February 2012. They had been dating for more than a year.

The three-time Grand Slam champion, who won Olympic gold in Barcelona in 1992, has not been arrested.

A publicist for Capriati has dismissed as an "over-exaggeration" the facts in the police report based on Brannan's account.

Capriati was inducted into the International Tennis Hall of Fame last year, but her career was overshadowed by personal problems, including incidents of shoplifting and drugs.

She was charged with cannabis possession in 1994 and spent time in a drug rehabilitation clinic before struggling to return to the game. In 2010, she survived a prescription drug overdose.

Capriati reached the finals in two of her first three WTA events as a teenage rookie in 1990 and won her first tour title at Puerto Rico. Two years later, she defeated Arantxa Sanchez-Vicario in the Olympic women's final.

After a hiatus during most of the span between 1994 and 1998, Capriati staged a successful comeback starting in 1999. She became World No. 1 in October 2001. She won the Australian Open and French Open that year, and retained her Aussie Open title in 2002.

Comments
Topics mentioned in this article
Tennis Jamie Hampton Caroline Wozniacki
Get the latest updates on IPL 2021, IPL Points Table , IPL Schedule 2021 , live score . Like us on Facebook or follow us on Twitter for more sports updates. You can also download the NDTV Cricket app for Android or iOS.