Tipsarevic came back strongly after losing the first set to beat the 80th-ranked Agut 3-6 6-1 6-3 in an hour and 49 minutes at the Nungambakkam tennis stadium. 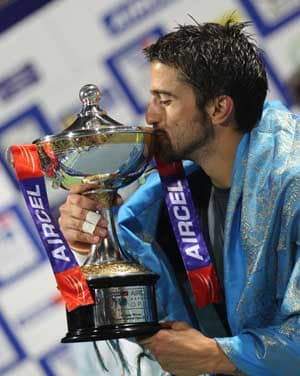 World No. 9 Janko Tipsarevic has won the ATP Chennai Open with a masterful fightback to defeat young Spaniard Roberto Bautista Agut in the final.

The second-seeded Serb came back strongly after losing the first set to beat the 80th-ranked Agut 3-6 6-1 6-3 in an hour and 49 minutes at the Nungambakkam tennis stadium.

Tipsarevic conceded just four games in the last two sets to end the giant-killing run by the 24-year-old Spaniard, who defeated top-seed Tomas Berdych in the quarter-finals.

Tipsarevic won the Chennai title for the first time after five unsuccessful attempts, including a loss to big-serving Canadian Milos Raonic in last year's final.

Tipsarevic earned $US69,500 ($66,700) and 250 ranking points for the morale-boosting win ahead of the season's first Grand Slam, the Australian Open, which begins in Melbourne on January 14.

"I am extremely proud of finally winning in Chennai," Tipsarevic said. "I just love this place and was desperate to win. It also gives me just the start I need for the season.

"To be fair to Roberto, I did not play my best tennis. I was too passive in the first set and waited for him to make mistakes. But I am happy I was mentally stable and came back in the final two sets."

Tipsarevic, asked if his next goal was the Australian Open title, said he was realistic enough not to dream about it.

"Men's tennis is tougher than ever before. Its not easy to beat the top players. To win a Grand Slam I will have to beat at least three of the top four. I hope I can achieve that some day."

Agut, who was treated for an abdominal strain in the second set, said the injury hindered his movement later in the match.

"I hope it is not too serious," he said. "I will rest for a few days and pray that it does not stop me from playing in the Australian Open.

"I may have lost the final, but I am very happy about the way the whole week went. It really makes me feel good about my game."

Agut gained early control of the match when he broke Tipsarevic's serve in the second game and then held his own comfortably to run away with the first set in 36 minutes.

Tipsarevic hit back with a break in the second game of the second set and then broke the Spaniard again in the fourth on the way to drawing level in the match.

The Serb played safe but solid tennis in the decider and secured breaks in the third game and the ninth that helped him wrap up the match.

Meanwhile, the 17-year-old tournament, South Asia's only ATP event, was given a three-year extension and will continue till 2016, the organisers announced.

Comments
Topics mentioned in this article
Tennis Vijay Amritraj Xavier Malisse Janko Tipsarevic Rafael Nadal Vishnu Vardhan Roberto Bautista Agut
Get the latest updates on ICC T20 Worldcup 2022 and CWG 2022 check out the Schedule, Live Score and Medals Tally. Like us on Facebook or follow us on Twitter for more sports updates. You can also download the NDTV Cricket app for Android or iOS.