The seventh seeds Jamie Murray and Bruno Suarez bounced back from a set down to beat Czech veteran Radek Stepanek and Canadian Daniel Nestor 2-6, 6-4, 7-5 on Rod Laver Arena. 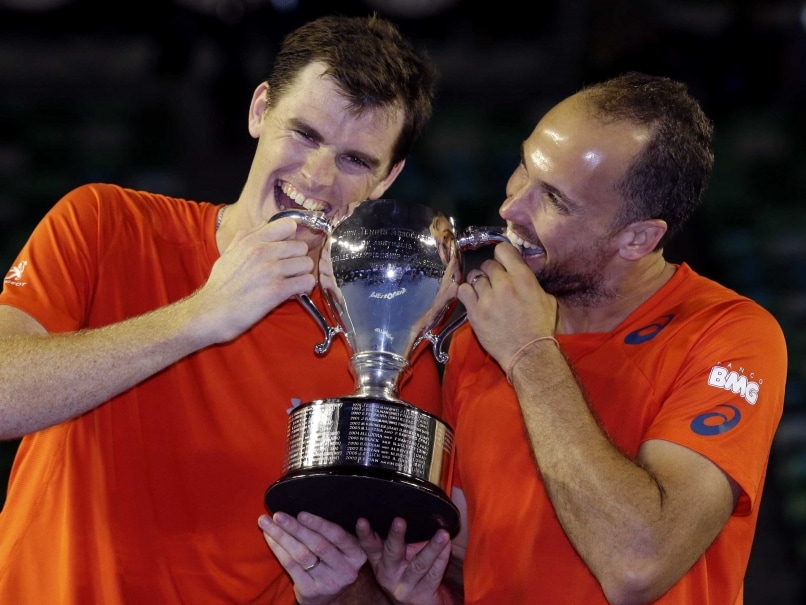 Jamie Murray (left) of Britain and Bruno Soares of Brazil hold their trophy after defeating Daniel Nestor of Canada and Radek Stepanek of the Czech Republic in the men's doubles final at the Australian Open.© AFP

Andy Murray got a boost Saturday ahead of his Australian Open final against Novak Djokovic after his brother Jamie teamed up with Brazil's Bruno Soares to win the doubles title. (Australian Open: Angelique Kerber Stuns Serena Williams to Win Maiden Grand Slam)

The seventh seeds bounced back from a set down to beat Czech veteran Radek Stepanek and Canadian Daniel Nestor 2-6, 6-4, 7-5 on Rod Laver Arena.

Andy Murray turned up at Rod Laver Arena to watch the trophy presentation and film it on his phone -- despite the fact it was 1:00 am and he is playing the singles final on Sunday evening.

"Andy you should be in bed, I don't know why you're here taking photos. We'll be there to support you tomorrow," Jamie Murray said in his acceptance speech.

It was the newly formed partnership's first doubles title, in their first Grand Slam together -- a feat last achieved by Vasek Pospisil and Jack Sock at Wimbledon in 2014.

If Jamie's sibling Andy beats world number one Djokovic in Sunday's men's final, they will become the first brothers to both the men's singles and doubles titles at a Grand Slam in the Open era.

Melbourne Park has now had different doubles champions for five straight years, with America's Bryan brothers the last team to successfully defend the title in 2011.

Comments
Topics mentioned in this article
Bruno Soares Jamie Murray Tennis
Get the latest updates on India vs England Series, India vs England , live score and IPL 2021 Auction . Like us on Facebook or follow us on Twitter for more sports updates. You can also download the NDTV Cricket app for Android or iOS.