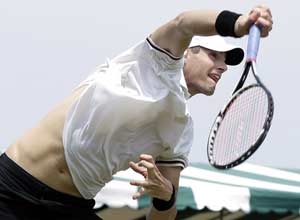 Top seeded Isner will square off against fellow American Ryan Harrison who was leading 6-4, 3-0 in his quarter-final when Benjamin Becker, of Germany, retired with an injury.

"He mixed up the serve and volleys more than I anticipated. I thought he was going to do it every time, so that threw me off a little bit," said Isner.

"When good servers meet on a court like that, it's not necessarily going to be so pretty. It was the sort of match I expected. I'm sure I could have played better, and more aggressive, but all in all I'm very happy with the result."

The 26-year-old Isner is seeking to reach his third final of the year and defend a title for the first time in his career. He finished runner up earlier this year to Roger Federer at Indian Wells.

Isner, who beat Belgian Olivier Rochus in last year's final, won 85 percent of his first-serve points against the South African qualifier on the grass courts.

German Becker retired from his match after 57 minutes with a left hamstring injury.

"It was unfortunate that he had to retire," Harrison said. "You never want to have anything bad like that happen to another guy.

"I felt I was playing and serving well and was in a good position there. I hope he has a speedy recovery."

Isner and Harrison have met once before with Isner taking the first-round contest in Memphis two years ago. Harrison is chasing his first ATP Tour title.

"I've watched him win some really big matches this year. I've been training with him a lot. He knows my game, and I know his game, so it's going to be a fun match tomorrow."

Hewitt is a two-time major championship winner and Ram won this event three years ago.