Roger Federer, getting a warm reception from a sparsely-filled stadium upon his introduction at the Indira Gandhi Indoor Arena, showcased part of his extraordinary talent to tower above his opponents, winning all his three matches with relative ease. 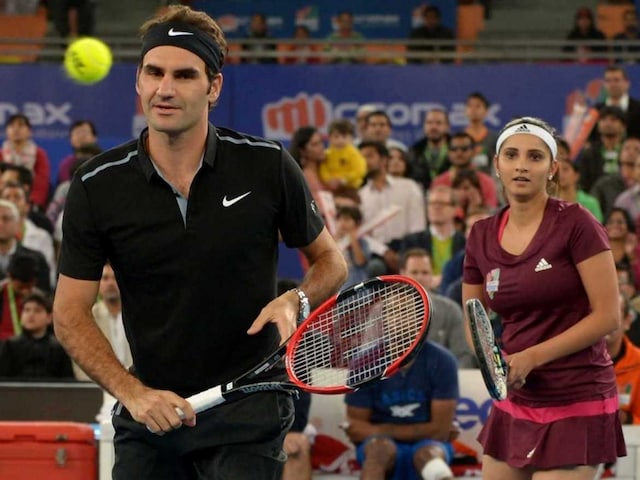 Federer, getting a warm reception from a sparsely-filled stadium upon his introduction at the Indira Gandhi Indoor Arena, showcased part of his extraordinary talent to tower above his opponents, winning all his three matches with relative ease.

The Aces went down 2-6 in the first match of the tie, with 14-time Grand Slam winner Pete Sampras, playing for the first time in the inaugural tournament, losing to old rival Patrick Rafter.

Sampras looked rusty; his trademark backhands all landing outside the court. He lost his first two serves to quickly trail 0-4 and never looked like recovering the deficit despite showing flashes of his past brilliance.

Then came the moment whole of the stadium was waiting for. Having earlier walked in to the court to a thunderous applause from the partly-filled stadium, Federer paired with Sania Mirza in the mixed doubles match, and began his IPTL sojourn in perfect fashion.

The pair broke their opponents' Bruno Soares and Daniela Hantuchova serve thrice to coast to a 6-0 victory - Aces 8-6. Slammers' tactical switch of introducing Nick Krygios in place of a misfiring Soares didn't work.

Federer continued to give a tennis masterclass in his next match, teaming with Rohan Bopanna in the men's doubles match against Lleyton Hewitt and Nick Krygios. His deft touch and smooth style of play enabled Aces to take a 5-1 lead and secure the contest 6-1.

Aces led 14-7 going into the men's singles match and World No.7 Thomas Berdych had a tough task of reducing the deficit against Federer.

He immediately trailed 0-2 but fought back to 3-3 but the Swiss maestro, supremely confident and getting better with each stroke, broke him at the crucial stage of the contest to go ahead 5-4 and win 6-4.

Comments
Topics mentioned in this article
Roger Federer Sania Mirza Tennis
Get the latest Cricket news, check out the India cricket schedule, Cricket live score . Like us on Facebook or follow us on Twitter for more sports updates. You can also download the NDTV Cricket app for Android or iOS.