I have a lot left to give, says Venus Williams

The American pulled off a stellar performance in Tokyo, beating World No.2 Victoria Azarenka and winning a pair of marathons against Simona Halep and Eugenie Bouchard to reach the semi-finals, where she was edged by Petra Kvitova, reports Xinhua. 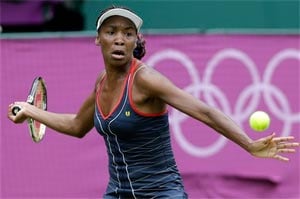 Seven-time Grand Slam champion Venus Williams has missed eight months in the past two years due to the Sjogren's Syndrome - an auto-immune disorder - but she showed this season that she can still take on the best of opponents.

The American pulled off a stellar performance in Tokyo, beating World No.2 Victoria Azarenka and winning a pair of marathons against Simona Halep and Eugenie Bouchard to reach the semi-finals, where she was edged by Petra Kvitova, reports Xinhua.

Now she has her sights set at scoring more in the China Open.

"Perhaps I don't have the same health as my opponents, but I just get out there and hold my head high no matter what, and I try not to think about it. I just can't go out onto the court with any fear," said Williams on Tuesday.

"The motivation for me is that I have a lot left to give. I haven't had a lot of good luck, so I know my luck's bound to turn. And when I sit at home and see tennis on TV, I know I can be out there."

Asked about dealing with Sjogren's syndrome, she said physically it's getting better. "Since I came back to the tour last year, I've always been trying new things to improve myself, always trying to get an edge.

"In the beginning, I tried traditional medicine and different things, but I didn't think I was getting results, so I tried more untraditional things, and as of late I feel like I've been seeing better results with that. So for me the key has been to keep trying different things. It's like a tennis match, sometimes some things work and some things don't. You just have to be patient with everything and keep fighting," she added.

Sjogren's syndrome is a chronic disorder of the immune system - a long-term autoimmune disease - in which the patient's white blood cells attack the saliva and tear glands, leading to dry mouth and eyes because the body's tear and saliva production is reduced. Others symptoms include arthritis.

Comments
Topics mentioned in this article
Tennis Venus Williams
Get the latest updates on ICC T20 Worldcup 2022 and CWG 2022 check out the Schedule, Live Score and Medals Tally. Like us on Facebook or follow us on Twitter for more sports updates. You can also download the NDTV Cricket app for Android or iOS.