Roger Federer took another step towards a sixth US Open title with an efficient 6-3, 6-4, 6-4 win over Philipp Kohlschreiber while third seed Andy Murray followed him into the fourth round with a clinical 6-3 6-2 7-5 victory against Brazilian Thomaz Bellucci. 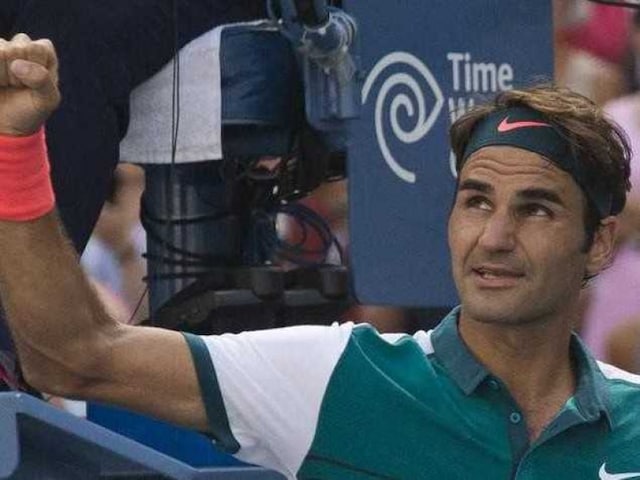 Roger Federer of Switzerland celebrates after defeating Philipp Kohlschreiber of Germany in their third round match at the U.S. Open Championships tennis tournament in New York, September 5, 2015© Reuters

Roger Federer, Andy Murray and Simona Halep strolled into the fourth round of the US Open on Saturday but shared the Flushing Meadows spotlight with tenacious underdogs Donald Young and Johanna Konta.

Second seed Federer took another step towards a sixth US Open title with an efficient 6-3 6-4 6-4 win over Philipp Kohlschreiber while third seed Murray followed him into the fourth round with a clinical 6-3 6-2 7-5 victory against Brazilian Thomaz Bellucci.

It was another leisurely afternoon on Arthur Ashe Stadium court for Federer, who has yet to drop a set, though he lost his serve for the first time in the tournament as Kohlschreiber broke him twice.

Federer, who had sprinted through his first two matches with the loss of only nine games, next meets big-serving American 13th seed John Isner, who advanced when Czech Jiri Vesely retired with a neck injury when trailing 6-3 6-4.

"I think I won the big points today," said 34-year-old Federer. "I served well when I had to at the end."

Richard Gasquet also wasted little time, the 12th seeded Frenchman romping to a 6-4 6-3 6-1 decision over a drained Australian Bernard Tomic, who was coming off a gruelling five set battle with compatriot Lleyton Hewitt.

Halep worked the night shift for the first time at this slam and found it to her liking as she steamrolled past American Shelby Rogers 6-2 6-3 in 67 minutes.

Konta continued to enjoy her time in the U.S. Open spotlight as the British qualifier beat 18th seed Andrea Petkovic 7-6(2) 6-3 to reach the fourth round of a grand slam for the first time.

It was the second upset in as many matches for the 24-year-old who toiled for three hours and 23 minutes in searing heat on Thursday to beat eighth seeded Spaniard Garbine Muguruza.

The sun returned on Saturday but again it was Konta's opponent feeling the heat, with Petkovic calling a medical timeout after going down a set and 3-0 in the second and wrapped in ice towels before finishing out the match.

"To be honest, I feel just as I did two weeks ago, I haven't exactly grown wings or anything," said Konta, ranked number 97.

"I must say I'm happy with how I have been playing so far this week but my feet are firmly on the ground.

"I haven't cured cancer or anything."

Konta will next meet fifth seeded Czech Petra Kvitova, who had no problem with the heat or her opponent, the twice Wimbledon champion crushing Slovakian Anna Karolina Schmiedlova 6-2 6-1.

One of just two players to beat world number one Serena Williams this season, Kvitova arrived at Flushing Meadows in good form having claimed her third title of the season at New Haven in the final tuneup for the U.S. Open.

Young, once hailed as the next great American tennis player, is finally showing that potential at 26 to an excited hometown audience fighting back from two sets down to claim a 4-6 0-6 7-6(3) 6-2 6-4 victory over 22nd seed Viktor Troicki of Serbia.

Young has had a workout this week, escaping another two-sets deficit in his opening match to beat French 11th seed Gilles Simon 2-6 4-6 6-4 6-4 6-4, then beating Britain's Aljaz Bedene in four sets in the second round.

Comments
Topics mentioned in this article
Roger Federer Andy Murray Thomaz Bellucci Tennis
Get the latest Cricket news, check out the India cricket schedule, Cricket live score . Like us on Facebook or follow us on Twitter for more sports updates. You can also download the NDTV Cricket app for Android or iOS.