An out-of-sorts Gilles Simon, who had a first round bye, was unable to make any impression on Marius Copil during the 7-5, 6-3 loss. 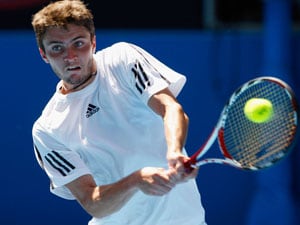 Third seed Gilles Simon blamed injury problems for his shock second round defeat at the hands of Romanian qualifier Marius Copil at the Brisbane International on Thursday.

An out-of-sorts Simon, who had a first round bye, was unable to make any impression on Copil during the 7-5, 6-3 loss.

"I couldn't move my legs -- I had a few body problems," Simon said, declining to elaborate on what the injuries were.

The 29-year-old has had injury concerns in the past and missed much of 2010 with a knee problem.

"It's always difficult to play the first tournament of the year," he said.

"Your body has to get used to the heat, the courts, the matches.

"I have 10 days to recover before Melbourne (Australian Open). Everything will be fine by then."

Comments
Topics mentioned in this article
Andy Murray Gilles Simon Marius Copil Kim Clijsters Tennis
Get the latest updates on India vs Australia Series, check out the India vs Australia Schedule for 2020-21 and Ind vs Aus live score . Like us on Facebook or follow us on Twitter for more sports updates. You can also download the NDTV Cricket app for Android or iOS.