Gilles Simon thrilled home fans by reaching the semi-finals of the Paris Masters on Friday, as he beat Czech fifth seed Tomas Berdych 6-4, 6-4. 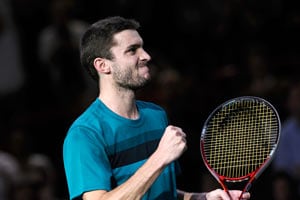 Gilles Simon thrilled home fans by reaching the semi-finals of the Paris Masters on Friday, as he beat Czech fifth seed Tomas Berdych 6-4, 6-4.

The victory in just under two hours was the first of a possible three as a record number of Frenchman played in quarter-finals of the indoor event at the Bercy arena in the east of the French capital.

Simon has been making his own luck all week after starting out by beating former Australian Open finalist Marcos Baghdatis and then putting out lucky loser Victor Hanescu, who replaced absent top seed Roger Federer in the draw.

Simon had a free pass into the quarters as Japan's Kei Nishikori pulled out before their third-round match with an ankle injury.

Berdych will now head to London to take his place for Monday's start of the season-ending World Tour Finals.

Simon, ranked 20th and the Bangkok finalist in September, needed four set points and almost an hour to win the opener against Berdych. He then recovered from a break down in the second to notch the popular victory.

He said he was satisfied with his performance and was happy to play well at a tournament that he loves in front of a home crowd, including his young son.

"I grew up not far from here (Fontenay-sous-Bois). It's the tournament that I watched when I was young. I've always wanted to do well. Up until now it's always gone badly. It feels good to finally do well...

"I hope I'll go even further," he added.

Berdych was been on a roll, winning 22 of his last 26 matches at the Masters event which he won in 2005. He has now lost to Simon in five of seven matches.

"He was just too good today, he made no mistakes at all," said Berdych. "I lost to a better player today, he played well and deserved to win."

Simon will await a semi-final opponent from London qualifier Janko Tipsarevic, the eighth seed and Polish qualifier Jerzy Janowicz, who beat Andy Murray in the third round.