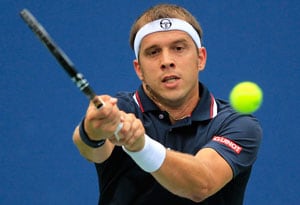 Last year's finalist Eduard Roger-Vasselin went down fighting to eighth seed Gilles Muller 7-6 (11), 1-6, 6-7 (3) in an entertaining and high quality first round match of the ATP Chennai Open here on Monday.

Muller, the 31-year-old southpaw from Luxembourg and ranked 42, survived two tough tie-breaks, while Roger-Vasselin, after taking the first set, gradually faded against an opponent who improved as the two-hour and 23-minute match progressed.

On the outside court, Spaniard Marcel Granollers became the first casualty as the seventh seed retired in the third set against Austrian Andreas Haider-Maurer who was leading 3-6, 7-6(6), 2-0.

Muller's enviable variations in his serves besides aggression made the difference while Roger-Vasselin failed to sustain the high standards he had displayed in the first set and parts of the third before committing a double fault on the very first match-point.

"It is always tough in the first match of the new season especially since I hadn't played a match in the last two months. Eduard is a very competitive player and I am happy to win today," he said.

"In the first set, I was on the backfoot, but in the second, I decided to play aggressively and the early break gave me the confidence. I played well thereafter."

There was nothing to separate the two in the first set that went with serve leading to the inevitable tie-breaker.

The 31-year old Roger-Vasselin, ranked 116 as against his high of 38 last year, served that bit better in terms of angles while Muller had the power but not the consistency in his first serves. Yet, neither came close to breaking serve as they slugged it out from the baseline.

In the tie-break, Roger-Vasselin blew four set-points as against two by Muller. At 10-10, the Frenchman came up with a forehand to move ahead 11-10.

Roger-Vasselin also earned the next point to pocket the set that lasted a little over an hour.

The second set was rather anti-climatic as Muller came up with three service breaks to push the match into the decider which too went with serve except in the middle when the duo traded a break apiece.

Muller served quite brilliantly in the tie-break to take a 4-1 lead which proved decisive while Roger-Vasselin had no response and eventually lost the match with a double fault.

Meanwhile, on the outside court, the 28-year-old Vijay Sundar Prashanth, ranked 557, turned back a 2-5 deficit in the third set and won five games on the trot to beat fourth seed Ilya Marchenko of Ukraine, 2-6, 7-6(7), 7-5, to qualify for the main draw.

Comments
Topics mentioned in this article
Gilles Muller Tennis
Get the latest updates on ICC Women's Cricket World Cup 2022 and IPL 2022, check out the Schedule , Live Score and IPL Points Table. Like us on Facebook or follow us on Twitter for more sports updates. You can also download the NDTV Cricket app for Android or iOS.