The winner of the 1990 US Open, Gabriela Sabatini was widely regarded as one of the most talented and charismatic players of the 1980s and 1990s. 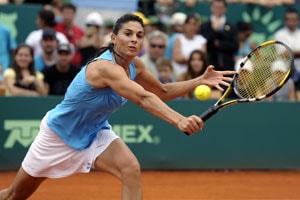 Former tennis star Gabriela Sabatini says she deliberately lost matches in her youth to avoid interacting with Press reporters. In comments published on Friday, the former world No. 3 Argentine said: "When I was younger and thought that I had to talk after winning a tournament, I often lost in the semifinals so I did not have to. It was that bad!" Sabatini told the Argentine newspaper La Nacion.

"I was very introverted. I had some issues at school because I was very inward-looking," she said. Now 43, Sabatini, who has a range of perfumes named after her, said her shyness was a major problem. "I got very nervous at that point. But at the same time I was very competitive and I got frustrated when I did not win," she said. "I might lose the first set, when I was little, and I gave up on the match just because I was so angry that I could not bear having lost the first set."

The winner of the 1990 US Open was widely regarded as one of the most talented and sexiest players of the 1980s and 1990s. Sabatini's rivalry with Steffi Graf made tennis headlines but the Argentine never became the world No. 1. "I think my fame and my public profile had something to do with the fact that I did not become world number one. To be so famous would also have been a problem if I had been world number one," Sabatini said.

"I loved playing tennis. I loved it since the first day I grabbed a racket, I was crazy about it. One never knows what comes behind that or with that. I loved to play, I was competitive, I wanted to win, that was all I knew. In the first few years tennis is a game. Later, it becomes a job," Sabatini said.

Sabatini, who retired in 1996, lives in Buenos Aires and often travels to Europe and the United States to promote her line of perfumes and other businesses.

Comments
Topics mentioned in this article
Tennis Maria Sharapova Aisam-Ul-Haq Qureshi Rohan Bopanna Lukas Dlouhy Leander Paes Andy Roddick Steffi Graf
Get the latest updates on IPL 2020, check out the IPL Schedule for 2020 and Indian Premier League (IPL) Cricket live score . Like us on Facebook or follow us on Twitter for more sports updates. You can also download the NDTV Cricket app for Android or iOS.