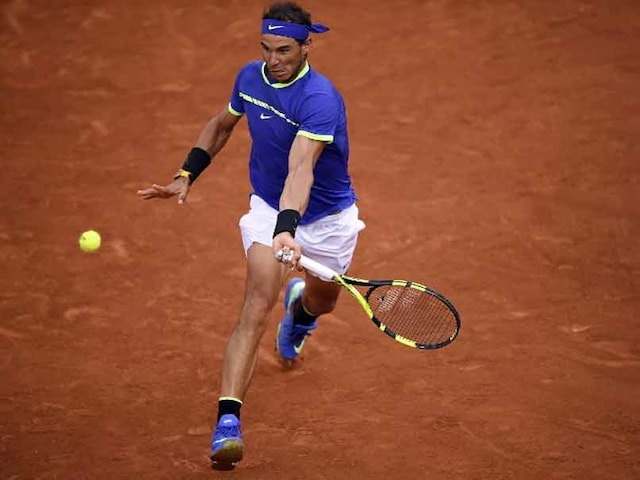 Nine-time champion Rafael Nadal surged into the French Open quarter-finals for a record-equalling 11th time on Sunday, while reigning women's title-holder Garbine Muguruza crashed out in the last 16. Rafael Nadal continued his ruthless form at Roland Garros by dispatching Spanish 17th seed Roberto Bautista Agut 6-1, 6-2, 6-2 to match Roger Federer's mark of last-eight appearances in Paris. The 14-time major winner is yet to drop a set, conceding just six games in the last two rounds as he strives to become the first man to win 10 titles at a single Grand Slam.

"I'm happy because Roberto is a very good player. It's very important for me to be in the quarter-finals one more time," said Nadal, who turned 31 on Saturday.

The fourth seed will meet compatriot Pablo Carreno Busta, through to his first Slam quarter-final, for spot in the last four after the latter stunned Canada's Milos Raonic. Carreno Busta, seeded 20th, needed seven match points to clinch a thrilling 4-6, 7-6 (7/2), 6-7 (6/8), 6-4, 8-6 win over the fifth-seeded Raonic in four hours and 17 minutes.

Novak Djokovic, the second seed, defeated Albert Ramos of Spain in straight sets to reach the quarterfinals. He won 7-6(5) 6-1 6-3.

Japan's Kei Nishikori fought off a fierce five-set challenge from rising South Korean talent Hyeon Chung to clinch a place in the last 16. Eighth seed Nishikori led two sets to one but trailed by a double break at 3-0 down in the fourth set when rain halted play on Saturday.

Kristina Mladenovic ensured France will have women in the quarter-finals for the first time since 1994 after dumping out fourth seed Muguruza 6-1, 3-6, 6-3. The French 13th seed is through to just her second Slam quarter-final -- after the 2015 US Open -- and will face Switzerland's Timea Bacsinszky for a spot in the last four.

Danish 11th seed Caroline Wozniacki knocked off 2009 champion Svetlana Kuznetsova 6-1, 4-6, 6-2 to reach the last eight for just the second time. Wozniacki, who made her only other quarter-final appearance at Roland Garros in 2010, will meet Latvian teenager Jelena Ostapenko next.

Second seed Karolina Pliskova advanced to round four with a 7-5, 6-1 victory over Germany's Carina Witthoeft. Pliskova, who had won just twice in five previous French Open appearances before this year, will face Paraguay's Veronica Cepede Royg for a quarter-final spot.

World number 290 and qualifier Petra Martic reached the last 16 with a 6-1, 6-1 win over Latvian 17th seed Anastasija Sevastova. Croatia's Martic, a former top 50 player whose ranking slumped after a back injury sidelined her for 10 months, will face Ukraine's Elina Svitolina.

"When I got injured, my only hope was that I would get a second chance so I can play some of my best tennis again," said Martic. "I still can't believe that I'm sitting here."

Comments
Topics mentioned in this article
Rafael Nadal Garbine Muguruza Tennis
Get the latest Cricket news, check out the India cricket schedule, Cricket live score . Like us on Facebook or follow us on Twitter for more sports updates. You can also download the NDTV Cricket app for Android or iOS.