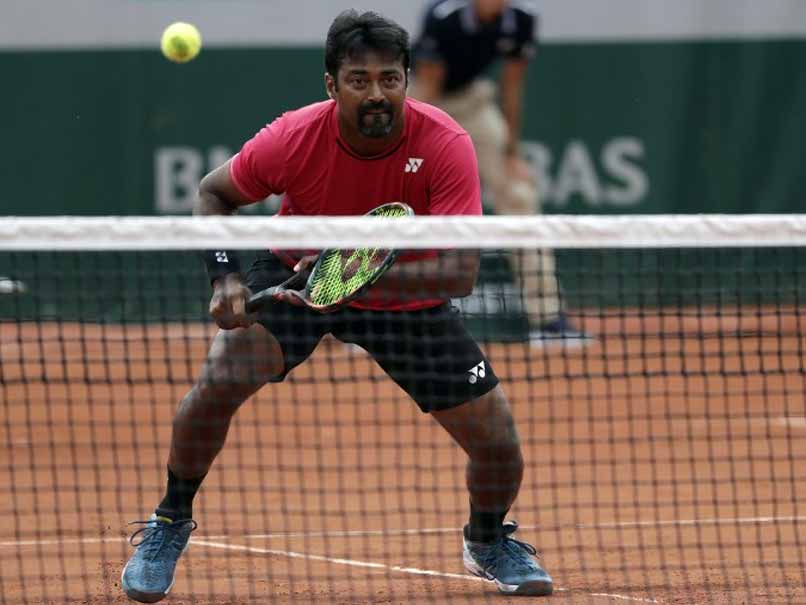 Paes and Scott Lipsky lost 6-7 2-6 to crash out of the tournament.© AFP

The Indian pair of Purav Raja and Divij Sharan advanced to the men's doubles pre-quarterfinals after an upset win but their senior compatriot Leander Paes ended his campaign in the French Open here on Friday. Another Indian Sania Mirza began her campaign with a win in mixed doubles with her partner Ivan Dodig of Croatia. The second seeded Indo-Croatian pair beat the Croatian combo of Darija Jurak and Mate Pavic 7-5 6-3 in the opening round match.

In men's doubles, the unseeded Raja and Sharan upstaged the 15th-seeded Austrian-Croat combo of Oliver Marach and Mate Pavic 6-4 3 -6 6-4 in a second-round match that lasted two hours and 11 minutes to enter men's doubles pre-quarterfinals.

The duo will next face the 11th seeded team of Jean-Julien Rojer of The Netherlands and Romania's Horia Tecau.

The young Indian pair sent down five aces and also converted two of the five break point chances that came their way.

Oliver and Mate paid the price for failing to convert the six break point opportunities.

In another second round men's doubles match, Paes and his American partner Scott Lipsky lost 6-7 2-6 to crash out of the tournament.

Paes also lost his mixed doubles opening round match to make an early exit from the tournament. Paes and his partner Martina Hingis of Switzerland, who were unseeded, lost to fourth seeds Katarina Srebotnik (Slovakia) and Raven Klaasen (South Africa) 4-6 6-1 2-10.

Rohan Bopanna and his partner Pablo Cuevas of Uruguay, however, advanced to the pre-quaterfinals with a hard-fought 5-7 7-6 6-4 win over the pair of Treat Huey (Philippines) and Denis Istomin (Uzbekistan).

Comments
Topics mentioned in this article
Leander Paes Divij Sharan Purav Raja Sania Mirza Tennis
Get the latest updates on IPL 2021, IPL Points Table , IPL Schedule 2021 , live score . Like us on Facebook or follow us on Twitter for more sports updates. You can also download the NDTV Cricket app for Android or iOS.