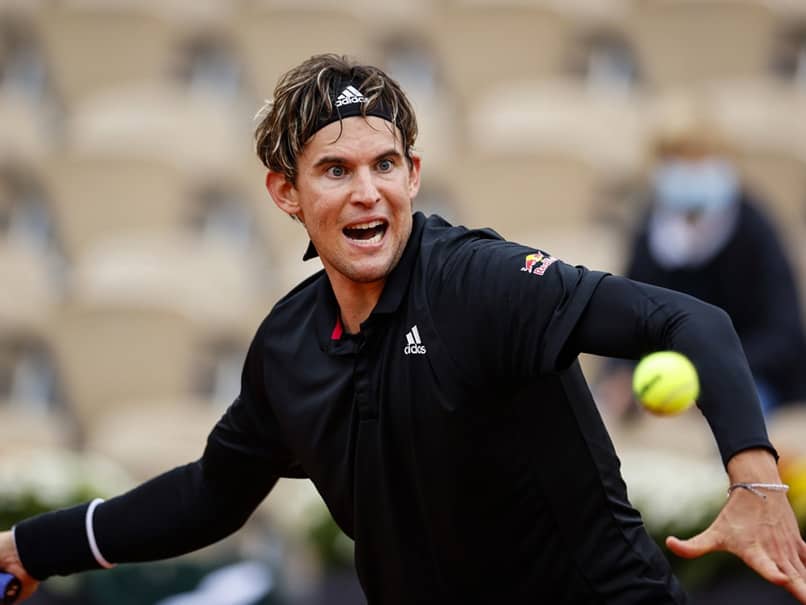 French Open 2020: Dominic Thiem progressed into the third round at Roland Garros.© AFP

US Open winner Dominic Thiem swept into the third round at Roland Garros on Wednesday with a 6-1, 6-3, 7-6 (8/6) victory over American qualifier Jack Sock. The Austrian third seed will play Norway's Casper Ruud, seeded 28th, or American Tommy Paul for a place in the last 16 in Paris. "I'm very happy with my game in the first two rounds. It was not an easy draw at all and I'm very happy not to drop a set," said Thiem, who defeated 2014 US Open winner Marin Cilic in round one.

Dutch fifth seed Kiki Bertens had to be taken off court in a wheelchair after a fiery win over former finalist Sara Errani.

Bertens triumphed 7-6 (7/5), 3-6, 9-7 in a three-hour 11-minute clash which left her in cramps and Italian Errani screaming an obscenity as she left the court.

"After one hour, she's injured but then she's running around like never before," said Errani.

"She leaves the court in a chair and now she's in the locker room and eating in the restaurant, perfect. She exaggerated."

"It made me very angry, so well done to her but she can win without doing that."

Bertens is due to meet Katerina Siniakova next while Elina Svitolina overcame Mexican qualifier Renata Zarazua 6-3, 0-6, 6-2.

The Ukrainian third seed is coming off a title at Strasbourg last week and will next play Russian 27th seed Ekaterina Alexandrova, but was briefly taken aback by a sonic boom.

The thunderous noise that panicked residents of Paris was caused by a French fighter jet that broke the sound barrier.

"I was a bit worried because I thought something bad happened," said Svitolina.

The military said the plane had been scrambled to go to the aid of another aircraft that had lost radio contact, and was authorised to travel at supersonic speed.

Comments
Topics mentioned in this article
Dominic Thiem Jack Sock Tennis
Get the latest updates on IPL 2020, check out the IPL Schedule for 2020 and Indian Premier League (IPL) Cricket live score . Like us on Facebook or follow us on Twitter for more sports updates. You can also download the NDTV Cricket app for Android or iOS.