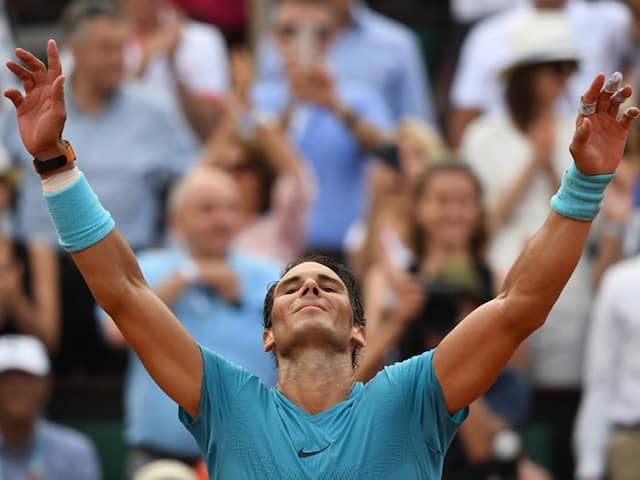 Rafael Nadal claimed an 11th French Open title on Sunday with a 6-4, 6-3, 6-2 demolition of Dominic Thiem despite a worrying injury scare in the closing stages of the final. The 32-year-old world number one now has 17 Grand Slam titles, just three behind great rival Roger Federer. Nadal endured a nervy conclusion to the final, however, when he needed treatment in the fourth game of the third set for a finger injury before sealing victory on a fifth match point when Thiem fired a backhand long. "It's really incredible. I played a great match against a great player," said Nadal. "I had tough moment in the third set with cramps in my hand. I was very scared but that's sport -- it was very humid.

Rafael Nadal admits that his desire to clinch an 11th French Open title on Sunday is fired by his growing realisation that the end of his career may not be too far away. The 32-year-old Spaniard, with 16 majors to his name, will play his 24th Grand Slam final at Roland Garros against Dominic Thiem who is in his first. The victory will give Nadal an 11th title in Paris and equal Margaret Court's all-time record for wins at the same Slam event - in her case, the Australian Open from 1960 and 1973. Nadal still trails great rival Roger Federer by four major titles although the Swiss star is more than four years older. The statistics illustrate Nadal's concerns - he has missed at least eight Slam tournaments in his career through a legacy of wrist and knee problems. Such is his motivation to win his 17th Grand Slam on Sunday, that the task facing Austrian 24-year-old Thiem was described as "almost impossible" by Del Potro. There have, however, appeared to be one or two chinks in Nadal's armour at Roland Garros this year. On Friday, del Potro was by far the better player in the first set while, in the quarter-finals, Diego Schwartzman won the first set. It was the first time in three years that Nadal had dropped a set in Paris.

21:23 IST: RAFAEL NADAL! The undisputed king of clay and top-seeded Spaniard outclasses Dominic Thiem 6-4, 6-3, 6-2 to clinch his 11th title. Forehand play, return serves, smart touches past the net has been the major highlights of Nadal's triumphant run. Meanwhile, the 24-year-old Thiem will take a lot to learn from this loss, it is just a start for a long path to pave for the Austrian.

21:04 IST: Third point for Nadal, leads 3-1. The title looks well and clearly within the reach of the Spaniard. Barring the first set, Thiem has been well and truly outplayed.

The King of Clay gets the pivotal break! Leads 2-1 in the third set.

21:00 IST: FAULT THIEM! Nadal takes quick points and takes a quick break to remove his arm band and the finger grip, the sweat must be uneasy for the Spaniard. It will also give Thiem to keep his nerves and return back harder in the game.

20:55 IST: COME BACK! Nadal clinches the second point take a 2-1 lead. Thiem made a few unforced errors, took the net time and again as the Spaniard takes a slender lead in the third set and closes in on clinching his 11th title.

20:48 IST: Nadal 1-1 Thiem in the third set. The Spaniard earned most of the points through his serves to which Thiem had no answer, leaked points.

20:43 IST: Thiem takes the opening point in the third set.

Beginning to take flight.@RafaelNadal takes a two sets to love lead over Thiem.

20:23 IST: ADVANTAGE NADAL! The Spaniard plays it slow, no power in the shot, Thiem falls prey and gives away the point. Nadal leads 5-2 in the second set after 40 minutes.

A familiar sight from @RafaelNadal. He leads 4-1.

20:15 IST: BRILLIANT FROM THIEM! 2-4 now, the Austrian showed better composure, returned serves well, out of reach for the Spaniard to take a crucial point.

20:12 IST: Nadal 4-1 Thiem in the second game. The Austrian caused an unforced error to give away an easy point. There is a little breather in the difference between the points now. Nadal, going strong for the 11th title.

20:05 IST: Thiem gets one back but still plenty of work to be done to overturn the 1-3 deficit in the second set.

19:58 IST: Nadal bringing his experience into play here takes 2-0 lead in the second set, making smart touches to return the serves from Thiem. The Austrian meanwhile, fights back but fails to cling on.

Eleven in his sights...@RafaelNadal cool under pressure to take the first set 6-4 over Thiem.

19:40 IST: Nadal takes the first set in 61 minutes. It was closely contested but the king of clay had better composure as Thiem made costly unforced errors to give away the first set. The Austrian at 24-year-old did his bit to make it look competitive. On to the second set now.

19:34 IST: DOUBLE FAULT Nadal! The first one we have seen from the Spaniard in the summit clash.

19:31 IST: 4-all. Thiem got hold off that point quite easily serving the ball away and right to Nadal. Its neck-in-neck in the first game.

19:27 IST: Nadal leads 4-3 in first set. The Spaniard served it trying to keep the ball away from the Austrian -- who net the ball to hand the game point.

19:23 IST: Thiem takes it, 3-3 in the first set now. The Austrian has improved on the return serves here to equalise the game.

19:17 IST: Brilliant from Nadal! Uses the space in the court well, stands close to the net and tucks the return serve away for a point.

19:08 IST: Nadal leads 3-2. Serves the ball but Thiem nets it, easy picking this for the Spaniard. Thiem making unforced errors.

18:47 IST: No composure from Thiem! The Austrian leaking point after point, its all Nadal at the moment, leads 2-0.

18:43 IST: Nadal takes 1-0 lead in the first set, complete domination. 91% of forehand play used by the Spaniard to take the slender lead.

18:42 IST: The ball gets rolling, Nadal takes the first serve.

Will it meet an old friend today, or does it await a new champion?#RG18 pic.twitter.com/s394V6W4RQ

18:35 IST: The Spaniard and the Austrian have taken the court. Both warm-up for one final time before the summit clash.

Nadal is only the second man after Roger Federer to reach 11 finals at the same Grand Slam.

18:15 IST: Hello and welcome to the live commentary from the men's singles final between top-seeded and 10-time champion Rafael Nadal versus seventh seed Dominic Thiem.

At least Thiem has in the past found the key to unravelling the Nadal clay court enigma. He is the only man to beat the world number one on clay in the last two years - in Madrid this spring and in Rome last year. In Madrid, Thiem thrived in the quicker, higher altitude conditions to win their quarter-final in straight sets. But that was only after Nadal had allowed him just two games in a last-eight mauling in Monte Carlo. In Madrid, Thiem said the key was to be positive against Nadal. Nadal and Thiem have met nine times -- all of them on clay. Thiem also defeated his rival in Buenos Aires in 2016, joining Novak Djokovic and Gaston Gaudio as the only men to have beaten Nadal three times on clay.

However, Nadal has won both their clashes at Roland Garros -- in 2014 and in last year's semi-finals by a comfortable 6-3, 6-4, 6-0 margin. Despite the expectation ahead of the final, the weather may prove the only winner on Sunday with heavy rain and thunder storms expected around 1500 (1300GMT) when the final is due to start.

Comments
Topics mentioned in this article
Rafael Nadal Dominic Thiem Tennis Live Blogs
Get the latest Cricket news, check out the India cricket schedule, Cricket live score . Like us on Facebook or follow us on Twitter for more sports updates. You can also download the NDTV Cricket app for Android or iOS.