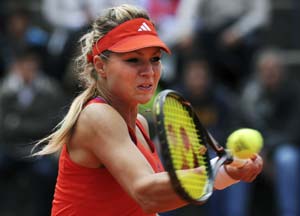 Second-seeded Russian Kirilenko, who lifted the title at the Estadio Nacional in 2008, overcame Briton Elena Baltacha 7-6 (8/6), 6-1 in a struggle which began with a first set lasting exactly one hour in front of holiday crowds.

Spain's Anabel Medina Garrigues, the third-seeded holder, got past German Kristina Barrois with more ease as she posted a 6-4, 6-1 win. That win was a repeat of last year's final won by the Spaniard.

"I played pretty well considering I wasn't able to warm up due to rain this morning," said the winner. "The start felt strange but after a few games I managed to feel better and get comfortable.

"I won in the end so I'm quite happy. When you win an event you want to come back the next year and defend the title.

"But all the matches are difficult and this one was not an exception. I'm taking it step-by-step and see how I go."

Medina Garrigues, a 29-year-old who has won 10 of her 11 career trophies on clay, broke Barrois five times in their match lasting just under 90 minutes.

Kirilenko, losing finalist in February at Pattaya, Thailand, battled the 63rd-ranked Baltacha as the Briton tried in vain to win only her third WTA match of the season.

The Russian seed finally claimed an opening set featuring six breaks of serve in a tiebreaker, earning the lead on her first set point after saving two for Baltacha.

In the second Kirilenko stamped her authority on the contest after another 45 minutes.

Australian Jarmila Gajdosova defeated Maria-Teresa Torro-Flor of Spain 6-3, 6-1, while Briton Heather Watson, a qualifier who last played more than a month ago in Miami, beat Czech Lucie Hradecka 6-4, 6-4 to next face Cetkovska.

Men's ATP play was highlighted by locals as Portuguese players went into action.

Comments
Topics mentioned in this article
Tennis Alisa Kleybanova Fernando Verdasco Richard Gasquet Stanislas Wawrinka Juan Martin del Potro Anabel Medina Garrigues Maria Kirilenko Ana Ivanovic
Get the latest updates on India vs South Africa and check out  Schedule, Results and Live Score. Like us on Facebook or follow us on Twitter for more sports updates. You can also download the NDTV Cricket app for Android or iOS.