On the verge of victory, Mardy Fish took a lusty swing and staggered out of the follow-through, his left calf cramping and his ability to continue in doubt. Three points later he limped into the quarterfinals, the last American standing at the Sony Ericsson Open. A gimpy Fish whacked a service winner on match point to win a grueling duel against Juan Martin del Potro, 7-5, 7-6 (5). 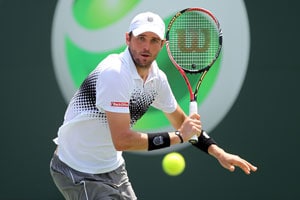 On the verge of victory, Mardy Fish took a lusty swing and staggered out of the follow-through, his left calf cramping and his ability to continue in doubt.

Three points later he limped into the quarterfinals, the last American standing at the Sony Ericsson Open. A gimpy Fish whacked a service winner on match point to win a grueling duel against Juan Martin del Potro, 7-5, 7-6 (5).

Fish is the lone U.S. player among the 16 men and women in the quarterfinals. At 29, he'll overtake Andy Roddick and become the top-ranked American man for the first time if he defeats No. 6 David Ferrer on Wednesday.

"Being the No. 1 American would be something that would be pretty cool to tell my kids about," said Fish, who is married but not yet a dad.

"You should see my racket," the 2008 French Open champion said, managing a smile. "I kind of broke my racket, and then kind of cried a little bit, and then I was OK."

No. 21 Andrea Petkovic of Germany reached the semifinals with her second upset in two days, beating No. 6 Jelena Jankovic 2-6, 6-2, 6-4. Petkovic eliminated No. 1 Caroline Wozniacki in the fourth round.

No. 1 Rafael Nadal committed only five unforced errors and defeated No. 21 Alexandr Dolgopolov 6-1, 6-2.

The U.S. men's rankings face a possible shake-up because Fish's longtime friend Roddick lost his opening match last week and is expected to drop from eighth to about 15th, the lowest he has been since 2002.

By contrast, Fish's fortunes are on the rise. He's ranked a career-best 15th and is into the Key Biscayne quarterfinals for the first time in his 12-year career.

"I've got some time still, and still feel relatively young - although I probably won't tonight," said Fish, healthy now after battling frequent injuries. "I've had some years where I haven't played very many matches, and I'll hopefully get those on the back end."

He and del Potro both looked weary at the end of their 21/2-hour slugfest in humid, 85-degree sunshine. When Fish began cramping in the tiebreaker, he knew he needed to avoid a third set.

"I was very lucky - I would not have recovered," he said. "I was struggling just to serve there that last point."

Ferrer will be a handful. He topped Marcel Granollers 6-1, 6-2 and has lost only 12 games in three matches.

While Fish grew up in Florida, the majority of stadium spectators favored his Argentine opponent, with fans chanting and singing del Potro's name between points.

"I didn't know where I was," Fish said with a smile. "He certainly had the crowd on his side. I did hear some people rooting for me. I appreciate that."

True enough. Shouted one comedian: "Don't let him off the hook, Fish!"

The match began to swing Fish's way in the ninth game, when he saved five break points to hold for a 5-4 lead. He needed six set points to break and close the set, doing so when he clipped the net cord for a lucky winner.

"It was one of those matches where a couple points here and there, and you lose," he said. "That's tennis. I mean, it's a brutal game in that sense."

It was the sort of stamina test Fish would have flunked before a recent fitness kick. After undergoing knee surgery in September 2009, he changed his diet and lost more than 30 pounds.

Only occasionally does Fish still allow himself a glass of wine, a burger or a slice of cheese pizza - no other toppings, thanks.

Comments
Topics mentioned in this article
Tennis Andrea Petkovic Caroline Wozniacki Juan Martin del Potro Andy Murray Maria Sharapova Mardy Fish
Get the latest updates on ICC T20 Worldcup 2022 and CWG 2022 check out the Schedule, Live Score and Medals Tally. Like us on Facebook or follow us on Twitter for more sports updates. You can also download the NDTV Cricket app for Android or iOS.