Federer to face Roddick as Clijsters crashes out

Roger Federer set up a 24th career meeting against old rival Andy Roddick on Saturday as both men eased through the Miami Masters second round, but crowd favourite Kim Clijsters crashed out of the women's event. 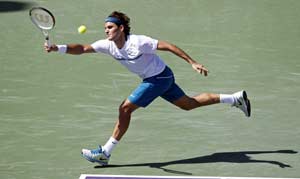 Roger Federer set up a 24th career meeting against old rival Andy Roddick on Saturday as both men eased through the Miami Masters second round, but crowd favourite Kim Clijsters crashed out of the women's event.

"I felt like I had to win the match like three times at the end, so I was relieved to come through," Federer said. "And beating an American in America is always a big deal, because this is here where they usually play their very best."

The Swiss superstar is bidding to capture his third Indian Wells-Miami title double, having also won the back-to-back US hardcourt Masters events in 2005 and 2006.

"I guess I'm more confident now. I have been playing really nice as of late," Federer said.

The American, who is at his lowest ranking since July 2001, won in 74 minutes. 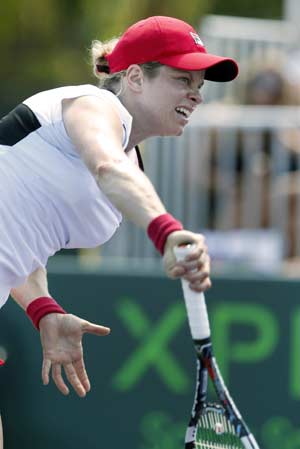 In the women's event, former world number one Clijsters saved three match points but lost 6-4, 7-6 (7/5) to Belgian compatriot Yanina Wickmayer, the 23rd seed, in the third round.

"She definitely started off much better and was more consistent throughout," Clijsters said. "It was close. It's a little bit frustrating knowing that I am playing not even 50 percent but it is still that close.

"On one hand I could have beaten her with the way that I was playing and feeling, but she played good."

Clijsters, who was playing her first tournament since an Australian Open semi-final defeat by Azarenka, had skipped last week's Indian Wells tournament to rest her injured ankle.

American 10th seed Serena Williams breezed into the fourth round with a 6-2, 6-1 win over Italian number 21 seed Roberta Vinci.

Williams, who is playing her first tournament since a fourth-round exit at the Australian Open, will face either Australian sixth seed Samantha Stosur or South Africa's Chanelle Scheepers for a place in the last eight.