Tomic, who claimed his eighth straight win of the year in downing the 36th-ranked Kevin Anderson 6-3, 6-7 (2/7), 6-3 at the Sydney International final, believes he can achieve top 10 status by year's end. 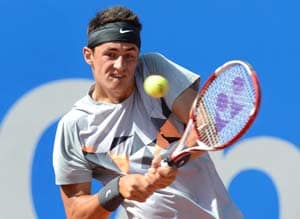 Roger Federer has warned rising Australian star Bernard Tomic that cracking the world's top 10 will be no easy task after the young Australian won his first ATP Tour title.

Tomic, who claimed his eighth straight win of the year in downing the 36th-ranked Kevin Anderson 6-3, 6-7 (2/7), 6-3 at the Sydney International final on Saturday, believes he can achieve top 10 status by year's end.

But 17-time Grand Slam champion Federer is not so sure.

"I think we should go step by step, see how it goes," said the Swiss great.

"Don't forget how tough the top 10 players are right now."

Tomic heads to Melbourne for the Australian Open with his ranking down from 64 to 43 and with a chance of facing Federer in the third round.

"If I get to Roger, it's going to be a interesting match," Tomic said during the Sydney tournament.

"Last I played him was in Cincinnati (last August) where I think he won the tournament. I lost to him in the third round, 6-2, 6-4, close match.

"I think I've improved quite a bit."

Federer said Tomic needs to think only about his first round match, against Argentina's Leonardo Mayer on Tuesday.

"He's got his work cut out, you know, in the first few rounds," he said.

"He will be making a mistake about thinking about me in the third round because he also has to get there."

Federer, the second seed at the opening Grand Slam of the season, is aiming to win his fifth Australian Open title.

Comments
Topics mentioned in this article
Tennis Roger Federer Stanislas Wawrinka Rafael Nadal David Ferrer Andy Murray Novak Djokovic Bernard Tomic
Get the latest updates on ICC T20 Worldcup 2022 and CWG 2022 check out the Schedule, Live Score and Medals Tally. Like us on Facebook or follow us on Twitter for more sports updates. You can also download the NDTV Cricket app for Android or iOS.