Federer into semifinals in Dubai

Roger Federer cruised into the Dubai Championships semifinals by beating Sergiy Stakhovsky of Ukraine 6-3, 6-4 on Thursday. 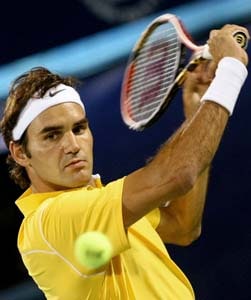 Roger Federer and Novak Djokovic, winners of six of the last eight Dubai Championships, remained on course to play for the title by winning quarterfinal matches Thursday in straight sets.

Federer awaited the winner of the all-French quarterfinal between Gilles Simon and Richard Gasquet. Djokovic will play Tomas Berdych in a rematch of their Australian Open quarterfinal. Djokovic won that, then beat Federer in the semis and Andy Murray in the final.

Berdych is "playing really well in the last year and a half," Djokovic said. "He's a quite consistent player right now. He has a very powerful serve, very fast baseline strokes, very flat. So I guess I need to be patient and wait for my chances."

"I thought it was a tough match, tougher than the last couple," Federer said.

Djokovic trailed Mayer 5-3 in the first set but the unseeded German's serve abandoned him and Djokovic wasn't troubled again.

"The ball was going faster today, and he took it to me from the start," Djokovic said. "Already first game he was on the net, twice, three times. I was not moving my legs well. I was making lots of unforced errors."

Next up for Djokovic is Berdych, who beat big-serving Phillip Petzschner of Germany 7-5, 6-4. The third-seeded Czech wasted six set points in the first set. In the second set, Berdych made the decisive break to lead 5-4.

"Philipp likes to play big serves, sometimes come to the net, a lot of slice in the backhand side and then he just makes a winner like that," Berdych said. "He does not give you a rhythm on court at all."