Four-time champion Roger Federer brings a sense of serenity into his first start since 2008 at the Dubai Championships, with the Swiss saying on Sunday that he is anything but stressed after a successful start to the 2011 season. 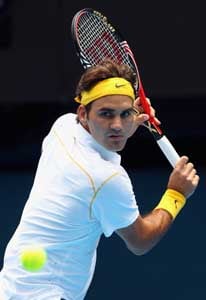 Four-time champion Roger Federer brings a sense of serenity into his first start since 2008 at the Dubai Championships, with the Swiss saying on Sunday that he is anything but stressed after a successful start to the 2011 season.

A Doha title at the start of the year followed by a semi-final loss to Novak Djokovic at the Australian Open cannot keep the would number two from optimism about his start to the spring outdoor hard court season.

"I am healthy and playing well. It is exciting to come back to tennis after doing well," said the winner of five trophies in 2010 - three of them in the final month of the season.

The player who bases himself in the emirate for training sessions throughout the year, said he went for a family holiday after Australia and has been working in Dubai for a week with coach Severin Luthi.

"Sometimes after a Grand Slam you are just exhausted, that was not the case this time after losing to Novak. I feel great and that is a plus for me.

"The season is very long and you cannot be too brutal on yourself after a loss."

Federer said that with his planning window always stretching 18 months into the future, the next long-range items on his agenda are the 2012 London Olympics and beyond.

"I do feel that in tennis, the years pass faster with all the travelling we do. But I really like coming back to places where I have done well, they bring great memories."

Federer last won Dubai in 2007, losing in the 2008 first round to Andy Murray less than a month after exiting in Melbourne to Djokovic. He missed 2009 with a back injury after a losing Australian final to Rafael Nadal and was out a year ago due to a virus.

Djokovic is defending the title which he won at the past two editions.

Federer worked in a training session at the Aviation club with longtime friend Ivan Ljubicic as players prepare for a Monday start.

The Swiss said that with his continuing fitness and no niggles after Australia, "I can live a normal life and not worry about getting healthy.

"I am playing well, I had a good end to last season. I think I have had some of the best for anyone over the past six months. I beat Djokovic three times at the end of last season (Shanghai, Basle, London) but that gets lost in the shuffle.

"I am coming to Dubai with a spring in my step.

"Regaining the number one ranking (from Nadal) is important for me, but I am really looking to win tournaments - though it is always nice to do so beating the top guys."