Always the joker, Novak Djokovic was a man bearing gifts after reaching the championship match at the ATP finals. 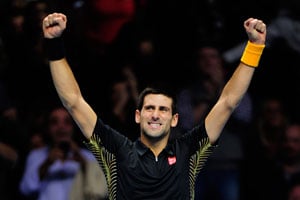 Always the joker, Novak Djokovic was a man bearing gifts after reaching the championship match at the ATP finals.

The top-ranked Serb beat Juan Martin del Potro 4-6, 6-3, 6-2 on Sunday in the semifinals of the season-ending tournament, and then handed out chocolates to thank journalists for their "cooperation throughout the whole year."

"I have a little chocolate treat for everybody," Djokovic said after answering English questions. "If you would be kind and accept my present to you."

The Australian Open champion then stepped off the podium and handed out chocolates to all who wanted one.

After each tennis match, players are obligated to hold a news conference. Most players, including Djokovic, normally answer questions in English from the international media first and then switch to their native language for journalists from their home countries.

Djokovic, who last week walked out on court at the Paris Masters with a Darth Vader mask to celebrate Halloween, is known for his good humor. Some videos on YouTube of him impersonating rival players have gone viral.

On Sunday, Djokovic had originally been scheduled to have his news conference about 1 hour, 20 minutes after his match ended. But that was delayed by 15 minutes, and he didn't actually start until about 30 minutes after that.

But, of course, Djokovic had a witty answer as to why he was so late - after his serious response.

"We just took a little more time to do all the post-match recovery program because I'm going to play tomorrow," Djokovic said. "I needed to be fresh and ready for a press conference, as you guys always can be very challenging."

Although Djokovic handed out the chocolates on Sunday, he'll be back for one final match on Monday. He will face Roger Federer on Monday in the final at the O2 Arena.

After Federer's 7-6 (5), 6-2 win over Andy Murray in the other semifinal, the six-time champion was surprised when told of Djokovic's actions.

Comments
Topics mentioned in this article
Tennis Novak Djokovic
Get the latest updates on IPL 2021, IPL Points Table , IPL Schedule 2021 , live score . Like us on Facebook or follow us on Twitter for more sports updates. You can also download the NDTV Cricket app for Android or iOS.