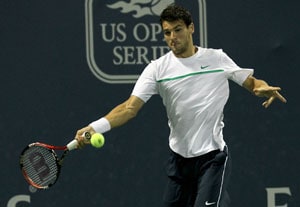 The Bulgarian arrived in Los Angeles at a career-high 57th in the world rankings and with hope of improving on two quarter-final appearances on the ATP Tour this year.

Harrison, 19, celebrated his move into the world's top 100 with a three-set first-round victory over Richard Berankis.

Harrison, who reached his first career semi-final in Atlanta last week, rallied from a set and a break down to notch a 6-7 (4/7), 7-5, 6-3 victory over Lithuania's Berankis, who is himself 21.

"I was down a set and 4-2 and he had a game point on his serve," Harrison said. "I was four points from being out of there. To get through one of those matches early in the tournament, it's like a kickstart."

Harrison was already riding high after breaking into the top 100 at 94 after reaching the final four in Atlanta.

"I got to 101 after Wimbledon - so close... finally got through last week ... to crack that barrier is obviously the first of many goals I want to achieve."

Another 19-year-old, Daniel Kosakowski, won his first career match at the ATP level as he defeated fellow qualifier Tim Smyczek 2-6, 6-1, 6-3.

Kosakowski completed his first season representing the University of California at Los Angeles in May, but says he is now going pro and doesn't plan to return to represent UCLA.

In the second round he'll face Latvia's Ernests Gulbis, who snapped a five-match losing streak with a 2-6, 6-3, 7-6 (7/5) upset of fifth-seeded Belgian Xavier Malisse.

Gulbis had not won a match since the second round at the Nice Open in May.

Eighth-seeded Russian Igor Kunitsyn advanced on schedule, beating Fernando Gonzalez of Chile 6-4, 6-3 to book his place in the second round.

Another US university standout was in action Tuesday as Steve Johnson, the reigning national collegiate champion for the University of Southern California, took on Gilles Muller.

Johnson delighted the California fans by taking the first set off Muller, before the Luxembourg veteran rallied to win 2-6, 6-3, 6-4.

Johnson didn't go quietly. After dropping his serve in the seventh game of the final set, he saved two match points in the ninth game to force Muller to serve out for the win.

Unlike Kosakowski, Johnson expects to return to his university in the autumn for one more season, trying to help them win a rare fourth straight national tennis title.

Even so, he saw his narrow loss to Muller as encouraging.

"I can hang with these guys," Johnson said. "He was a semi-finalist last week in the ATP and I'm right there with him."

While players like Harrison, Kosakowski and Johnson are trying to work their way into the game's elite, Mardy Fish is getting comfortable with his status as America's top-ranked man.

However Fish, who has a first-round bye as the top seed, admitted that he still doesn't feel he has produced the same standard of excellence over time as Andy Roddick.

"Andy's always going to be, in my opinion, the top dog of our generation," Fish said.

Fish, who arrived in Los Angeles after successfully defending his title in Atlanta on Sunday, won't play until Thursday, when he opens his campaign against Muller.

Baghdatis will take on Taiwan's Lu Yen-Hsun while del Potro will close out the action on Wednesday night against James Blake, a 6-2, 6-3 winner over Germany's Michael Berrer.

"Thankful That Tracks Have Been Opened": Dutee Chand