Top seed Juan Martin del Potro and number two seed Richard Gasquet set up a duel for the Estoril Open title as the pair advanced to the final on Saturday. 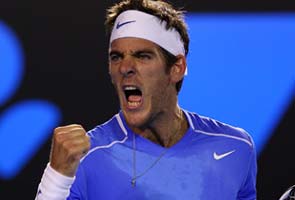 Top seed Juan Martin del Potro and number two seed Richard Gasquet set up a duel for the Estoril Open title as the pair advanced to the final on Saturday.

The winner had five aces but converted only one of his seven break points.

Though he only needed slightly more than 90 minutes, with just one 15-minute rain interruption, Argentine del Potro was pleased to get by the 22nd-ranked Wawrinka in straight sets.

"It's always tough to play Stan," said the South American, who is hunting an 11th career title. "He never gives you anything.

"It will be the same against Richard tomorrow -- another tough player on clay. I will have to improve my game even more if I'm to win.

"I love playing on the clay and it would be great to win this title again."

Del Potro's win-loss record for the season stands at 26-6 and he is playing his first ATP clay event of the spring.

Wawrinka was playing a third clay semi-final of 2012 after two in February.

Gasquet's marathon, lasting just over three hours, at the Estadio Nacional puts the 18th-ranked Frenchman into a second Estoril final.

When he last played in Estoril, in 2007, he lost the final to then up-and-coming Serb Novak Djokovic.

"He was attacking a lot and I had to defend all the time. He played very well, as clay is his best surface. He really made me work," Gasquet said of Ramos.

"I had to serve well in the end to get this win. We played a lot of big points. I had to fight but felt a lot better after I won the tie-break.

"Physically I feel good, but we will see on Sunday. I have nothing to lose and will just have to play my game."

Gasquet will be playing in his 15th career final on the ATP and trails Del Potro 1-3 in head-to-head encounters.

The Swiss-based Gasquet stands 6-8 in ATP finals, winning his last trophy two years ago in Nice. His last final was in Gstaad two months later.