Juan Martin del Potro battled back in the second set to beat James Blake 6-4, 7-6 (3) on Wednesday to reach the quarter-finals of the Farmers Classic. 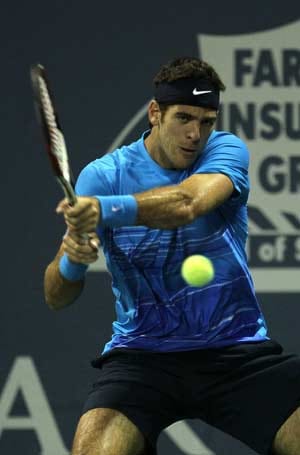 Juan Martin del Potro battled back in the second set to beat James Blake 6-4, 7-6 (3) on Wednesday to reach the quarter-finals of the Farmers Classic.

The No. 2 seed and Blake traded the final eight games of the set, leading to the decisive tie-break. Del Potro took control from there and won when Blake was unable to return his serve.

Del Potro, the 2008 tournament champion, is still working his way back from wrist surgery last year that derailed his season. He is ranked 19th in the world after dropping as low as No. 484 in February.

"I think I'm still a little far from the top-10 players," Del Potro said. "It's a long road to get there. I was playing really well before I got here."

Teenager Ryan Harrison continued his recent run of strong form by beating fellow American Michael Russell 6-3, 6-4 to claim a spot in the quarter-finals.

Lu Yen-hsun of Taiwan had the day's biggest upset, defeating No. 3 seed Marcos Baghdatis of Cyprus 6-3, 6-4 to set up a matchup against Harrison, who is attempting to make consecutive semifinals appearances.

Baghdatis, ranked 30th in the world, was playing his first match after receiving an opening-round bye.

"It really helps that it was the same guy from two years ago," said Lu, a quarter-finalist at last year's Wimbledon. "It gave me a little bit of confidence."

Harrison is coming off a strong showing in Atlanta, where he won three matches before falling to Mardy Fish. The 19-year-old's win over Russell was his third in four career tries.

Fish, the tournament's No. 1 seed, will play his first match on Thursday against Gilles Muller following a bye.

Harrison moved into the world's top 100 for the first time with his finish last week. His continual rise has some observers thinking he could assume the title as the next great American player.

"It's a privilege to be talked about like that. I've put myself in a position where people are even mentioning my name in the same sentence as Andre Agassi and Pete Sampras," Harrison said. "I haven't accomplished anything near what they have in their careers, so I have a long way to go. But I do believe in myself, I do believe that I have the ability to do it."

Ernests Gulbis of Latvia had little trouble in defeating qualifier Daniel Kosakowski 6-2, 6-4. Gulbis will play either No. 2 seeded Juan Martin Del Potro or Argentina and American James Blake, who take the court in Wednesday's late match.

Gulbis rode the momentum from Tuesday's upset of fifth-seed Xavier Malisse against the inexperienced Kosakowski, playing in his first year as a professional.

This is Gulbis' third tournament under the tutelage of coach Guillermo Canas. The two began working together at Wimbledon and the relationship appears to be paying dividends.

"On the court I didn't really have someone to push me," Gulbis said. "We were working hard, spending a lot of hours on court. And then everything just starts to come back. It's all basically about practice and confidence. That's all there really is to it."

Comments
Topics mentioned in this article
Tennis Grigor Dimitrov Treat Huey Somdev Devvarman Juan Martin del Potro James Blake Tommy Haas Dmitry Tursunov Michael Russell
Get the latest updates on IPL 2020, check out the IPL Schedule for 2020 and Indian Premier League (IPL) Cricket live score . Like us on Facebook or follow us on Twitter for more sports updates. You can also download the NDTV Cricket app for Android or iOS.