A gritty Ramkumar Ramanathan showed stomach for fight before Saketh Myneni had a taste of world class tennis as India trailed 0-2 after losing both the singles matches on the opening day of Davis Cup World Group Play-off tie against mighty Spain on Friday.

Ramanathan, despite his limitations against a much-superior rival, fought his heart out in a 4-6, 4-6, 6-3, 1-6 defeat to world number 26 Feliciano Lopez in the first match. Lopez played in place of originally nominated Rafael Nadal, who had a wrist injury problem. The whole build up to the tie was focused on Nadal as tennis fans hoped to see the 14-time Grand Slam champion in action.

While Ramkumar's spirited response to the challenge kept the 4,000-strong fans excited, Myneni was blown away by world number 13 David Ferrer, the 2013 French Open finalist.

A big serve, his biggest weapon, was nowhere to be seen as Myneni, who qualified for the US Open, melted in a 1-6, 2-6, 1-6 defeat against his Spanish rival. Ferrer returned the ball like a machine, literally toying with the Indian, ranked 137, in the one-hour 27-minute match. As Myneni struggled to cope with a super-fit Ferrer, getting on board became a mountainous task for the Indian.

He managed to take just four games in the match. He committed as many as 28 unforced errors to 11 of Ferrer. The Spaniard won a total of 84 points to 46 of Myneni.

India need to win Saturday's doubles match to keep the tie alive against the five-time world champions Spain. It remains to be seen who Leander Paes plays with Saturday.

At the draw, Paes and Myneni were nominated to play against Feliciano and Marc Lopez, the reigning French Open champions. If India win the doubles, 43-year-old Paes will become the most successful doubles player in Davis Cup history. 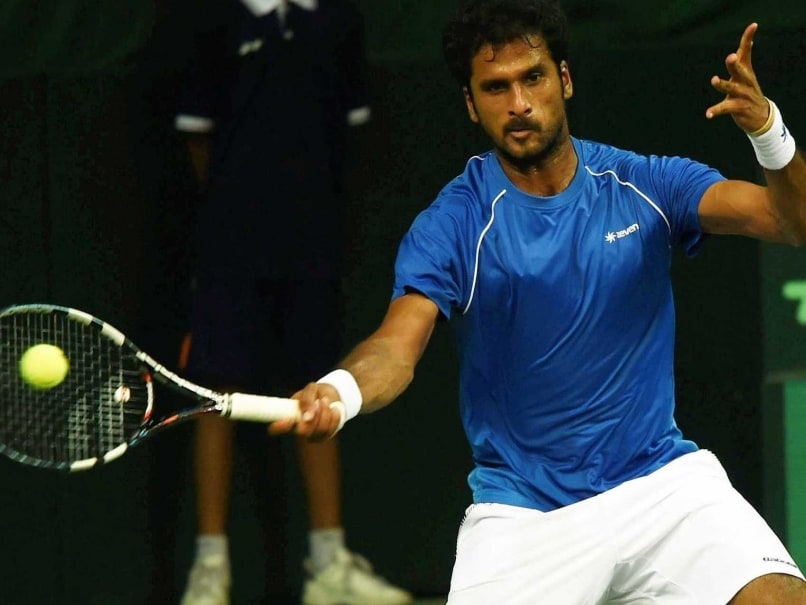 He is tied on 42 wins with Italian great Nicola Pietrangeli, who also holds the record for most singles wins (78) in Davis Cup. Ramkumar, egged on by the capacity crowd, gave his all but it was not enough to worry his mighty opponent. The packed stadium backed 203-ranked Ramkumar with the tunes of a band team and he certainly gave them a few moments to cheer and celebrate.

There was no doubt about the superiority of left-handed Lopez as he controlled the proceedings with ease. Ramkumar did try to fight it out but the Spaniard always had the match in his iron grip.

Lopez did not have to exert much to put ahead his side, which desperately wants to reclaim its place in the World Group after their relegation in January 2014. Ramkumar did take the third set from his rival, but Lopez changed gears easily and sealed the issue with his dominating game in the fourth set.

Lopez found passing winners with relative ease if Ramkumar rushed to the net and without fuss dictated the rallies.

All that the Indian could have done was fight hard which he did as an upset from him was not expected. Ramkumar lost a few points on his serve at the start of the match but a few unforced errors meant he was facing two breakpoints. He saved both but on the third, Lopez sealed the break with a passing winner. The 21-year-old Indian saved another chance in the seventh game in which he double-faulted twice, while 30-0 up, but Lopez just needed to hold his serve and the Spaniard easily served out the set in the 10th game at love. When Ramkumar smashed a volley out on breakpoint in the first game of the second set, he again had handed Lopez early advantage, which stayed with the Spaniard throughout. Ramkumar could never pose a danger to his superior rival, who soon pocketed the second set too.

The Indian put his heart and soul into the match in the third set. From the service hold in the third game, he managed to slot the ball exactly where he wanted, backed by his solid serve. Ramkumar took a medical time-out during the third set, raising suspicion if he is buckling, but did something that brought the house down by breaking Lopez in the eighth game. Sudden unforced errors had Lopez down 15-40. He saved both but a lucky backhand slice that touched the net cord and dropped dead on Lopez's court gave the Indian a third breakpoint of the match.

Ramkumar seized the moment with a forehand winner, as Lopez watched the ball pass him. The crowd was at its feet, with the applause lasting several seconds. Ramkumar served out the set in the next. Ramkumar had won a little battle and the fans had much to celebrate. Lopez though immediately snatched back the momentum by breaking Ramkumar in the second game of the fourth set, rushing to a 3-0 lead. In no time, the fourth set ended after that break.

In the second match, Ferrer played with good intensity, sprinting with the first set in 21 minutes. An error-prone Myneni, whose game was littered with unforced errors, made the job of the Spaniard easy. Two double faults in the fourth game saw Myneni concede a break and soon he was trailing 1-4. A blistering forehand by Ferrer meant that Myneni was again down a breakpoint in the sixth game. He saved the first but double-faulted on the second.

The set was over in a jiffy. Ferrer continued with his dominating game, getting the break in the first game of the second set as Myneni sent a backhand out. Ferrer zoomed to a 5-0 lead. The Indian got one break back but Ferrer sealed the set in the eighth game. It was the same story in the third set with Ferrer not conceding an inch.