World number three Andy and his older brother Jamie secured a 4-6, 6-3, 7-6 (7/5), 6-1 victory in the doubles rubber that left Britain needing one win from Sunday's two remaining singles matches to reach the semi-finals. 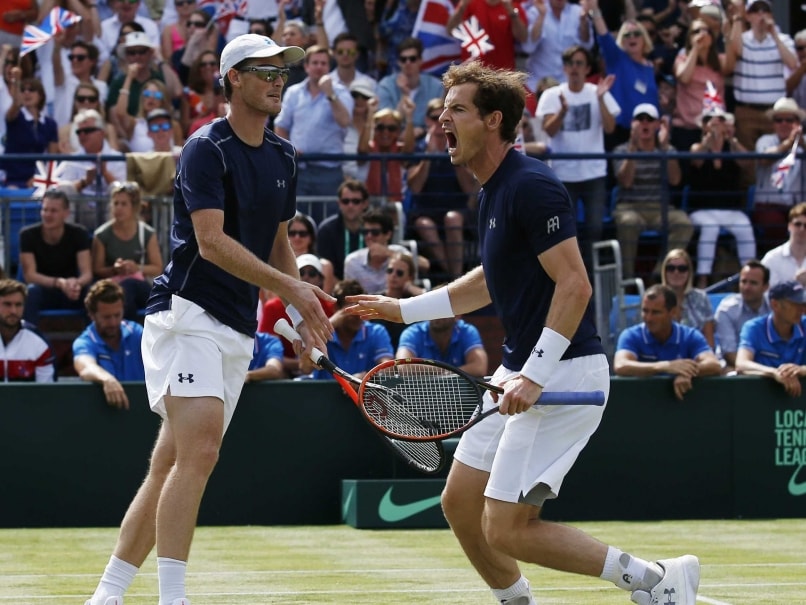 Andy can secure a last-four showdown against Australia or Kazakhstan in September if he defeats scheduled opponent Gilles Simon in the first of those singles ties at Queen's Club in west London on Sunday.

If he loses, British world number 89 James Ward is due to face world number 12 Tsonga in what would be the decisive second singles.

"We played an unbelievably high level-match against a top team in a great atmosphere. To represent your country with your brother and to win a match like this is unbelievable," Andy said.

The 28-year-old insisted he would be ok to play on Sunday despite suffering a third set injury.

"It was not so much my groin as my hip. It's sore but there's only one more match then I can rest after that," he said.

"I'll get patched-up and hopefully put on another good performance."

Nine-time winners France finished as runners-up to Switzerland last year, but now they are teetering on the brink of a first defeat against old rivals Britain since 1978.

"There was a lot of quality on court today. We gave our best but we were playing a good team. They showed today they can do some good matches together," Tsonga said.

With the tie on a knife-edge after Friday's singles, both teams had made late changes to their doubles line-ups.

Despite admitting his body is feeling the strain of a gruelling spell that saw him reach the Wimbledon and French Open semi-finals, Andy agreed to be inserted alongside Jamie instead of Dominic Inglot.

French captain Arnaud Clement also made a switch, with Tsonga selected ahead of Richard Gasquet, who is still less than 100 percent after his run to the last four at Wimbledon.

It was an especially bold move by British captain Leon Smith as Andy Murray had played only six doubles matches this year.

The Murray brothers hadn't played alongside one another since the Indian Wells tournament in March 2013 and the French pair made the perfect start with a break of Andy's serve in the opening game before comfortably closing out the first set.

But it was Andy who came to Britain's rescue when he successfully challenged a ball called in to secure a break in the fourth game of a second set that the hosts won to level the match.

There was a moment of drama in the third set at 5-5 when Andy slipped and rolled over clutching his groin and hip after reaching a Tsonga serve.

The two-time Grand Slam champion lay flat on his back for several minutes of treatment before finally clambering to his feet.

Moving well enough, Murray punched away a volley to earn a set point in the tie-break and then unloaded a blistering return to seal a two sets to one lead.

The French looked shell-shocked by that setback and their frustration boiled over when Clement complained that Tsonga had been distracted by a call of 'out' from the crowd in the second game of the fourth set.

Taking advantage of their opponents' sudden loss of focus, the brothers broke twice in the first four games and were soon hugging in celebration of another memorable moment for the Murray clan.