The tie is a great opportunity for India's singles players Saketh Myneni (4) and Ramkumar Ramanathan (1), who together have the experience of playing just five ties in their fledgling Davis Cup careers, to not only test themselves against the best but also learn from them 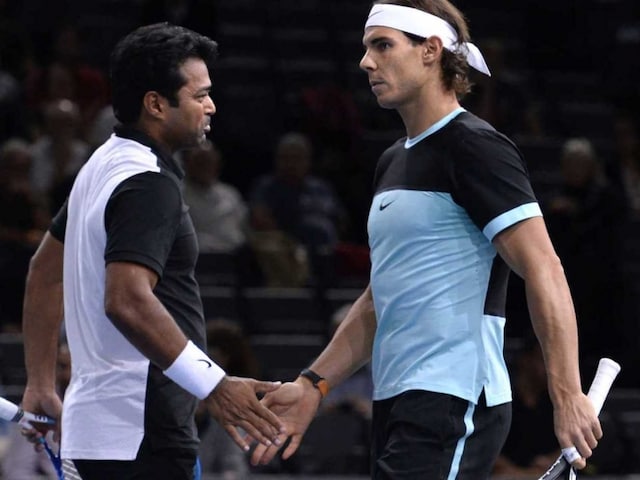 Leander Paes is just one win shy of becoming the most successful doubles players in the history of Davis Cup.Â © AFP

The Indian Davis Cup team is set for a battle of gigantic proportions as it takes on five-time champions Spain, who have packed the side with world class performers headlined by the legendary Rafael Nadal in their desperation to reclaim a spot in the elite World Group.

The World Group Play-off tie seems a classic David vs Goliath contest in which the Spaniards are not expected to be pushed much.

The tie, however, is a great opportunity for India's singles players Saketh Myneni (4) and Ramkumar Ramanathan (1), who together have experience of playing just five ties in their fledgling Davis Cup careers, to not only test themselves against the best but also learn from them.

It also is a once-in-a-lifetime opportunity for the Indian tennis fans to get to watch 14-time Grand Slam champion Nadal in action in a competitive match. The celebrated player has been struggling for a while but can never be discounted even in his worst phase.

India's singles players have just five with Ramkumar making his debut only two months back in Chandigarh against Korea.

It will be baptism by fire for Sumit Nagal, if he gets a game, and India will look to Leander Paes, a veteran of 53 ties, to shepherd the inexperienced players.

While playing against such world class players, nobody will question the defeat but the manner in which the Indian players will fight it out will surely be watched.

As Paes put it "they have nothing to lose", Myneni and Ramumkar will have to put their heart and soul in the contest.

The 28-year-old Myneni is coming to the tie after a good US Open where he qualified for the main draw and almost won his first round against Jiri Vesely.

He possesses a solid serve and decent ground-strokes even as his fitness remains a concern. His body loses fluid very quickly, making him prone to cramps.

Ramkumar had promised a lot initially but has not taken off as expected. His trademark inside-out forehand is one of the best in the country but he needs to put together all aspects of the game to emerge winner.

Paes is just one win shy of becoming the most successful doubles players in the history of Davis Cup as he is tied with Italian great Nicola Pietrangeli on 42 doubles victory.

Although he and Rohan Bopanna do not gel well, the latter's presence in this tie would have made India's doubles combination better and would have given the veteran a good shot at the record he is eyeing.

He is likely to with play Myneni if the Vizag lad remains good enough to compete in the doubles after Friday's contest.

Despite not having a single player in top-100, India have established themselves as a force in the Asia zone and consistently reach the Play-off stage but to make the World Group and stay there, the side needs to find better singles players. Otherwise they will continue playing in Asia/Oceania zone only.

As Nadal put it, Spain is a team that belongs to the World Group and not in zonal Group competition. They are in the Europe/Africa Group after losing the World Group first round to Germany in January 2014.

Since then they are struggling in the zonal competition, suffering a 1-3 reversal against Brazil and 2-3 defeat against Russia in absence of both Nadal and Ferrer.

They did not want to take any chance on tough conditions in India and have come with their best line up.

The last time India and Spain competed against each other was in 1965 when Spain beat India 3-2 in a home tie.

Spain lead the Head-to-Head record 2-1 with India managing to beat them, way back in 1927 in an away tie.

The first tie between the two nations was on a neutral venue i.e in Great Britain, where Spain beat India in the World Group Quarterfinal 4-1.

There was debate about the evening timing of the tie with the Indian team itself divided over the subject but that would hardly be a factor given that the Spaniards are known marathoners.

Comments
Topics mentioned in this article
Saketh Myneni Ramkumar Ramanathan Rafael Nadal Leander Paes Rohan Bopanna Tennis
Get the latest Cricket news, check out the India cricket schedule, Cricket live score . Like us on Facebook or follow us on Twitter for more sports updates. You can also download the NDTV Cricket app for Android or iOS.