Defending champion David Ferrer stormed into the semi-finals of the Auckland ATP tournament on Thursday, setting up a intriguing clash with resurgent Frenchman Gael Monfils for a spot in the decider. 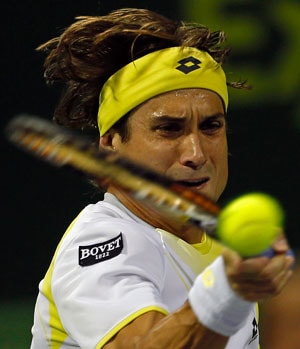 Defending champion David Ferrer stormed into the semi-finals of the Auckland ATP tournament on Thursday, setting up a intriguing clash with resurgent Frenchman Gael Monfils for a spot in the decider.

Top seed Ferrer needed less than an hour to swat aside Lukas Lacko of Slovakia 6-2, 6-1 at the warm-up event for next week's Australian Open, cracking forehand winners seemingly at will to break his hapless opponent's serve.

The Spaniard, chasing a record-equalling fourth Auckland title, looked far more dynamic than in his second-round match on Wednesday, saying he adjusted his game after being wrong-footed initially by the speed of the court.

"It's never easy but I played a very good game today, I had a good feeling with my game and my shots," the world number five said. "Yesterday was a surprise for me but today I feel better."

Ferrer said he would need to be at the top of his game for Friday's semi-final against Monfils, the former world number seven who has beaten the Spaniard in all three of their previous meetings.

The Frenchman, granted a wild card here as he returns from a knee injury that saw his ranking plummet, was involved in undoubtedly the most entertaining quarter-final of the day, downing evergreen German Tommy Haas 3-6,7-5, 6-3.

Third seed Haas started stronger in a tense match that at various times saw both players pick arguments with the chair umpire, taking the first set 6-3 after a rash of errors from Monfils.

The Frenchman found form in a second set, covering the court with typical energy and unleashing some spectacular winners to take a crucial service break in the fourth game.

It proved a turning point, with Monfils going on to win the set 7-5 and 34-year-old Haas fading as the match wore on, eventually conceding the third set 6-3 after more than two hours on court.

Second seed Philipp Kohlschreiber of Germany eased past Belgium's Xavier Malisse 7-6 (8/6), 6-4 to reach the semi-finals for the fourth time in nine appearances.

Kohlschreiber, the 2008 Auckland champion, will play Sam Querry for a place in the final after the American fourth seed defeated Canada's Jesse Levine 6-4, 7-6 (7/5).

The pair have met three times before, with the big-serving Querry enjoying a 2-1 winning record over the German.

Comments
Topics mentioned in this article
Tennis David Ferrer Gael Monfils
Get the latest updates on ICC T20 Worldcup 2022 and CWG 2022 check out the Schedule, Live Score and Medals Tally. Like us on Facebook or follow us on Twitter for more sports updates. You can also download the NDTV Cricket app for Android or iOS.