Ferrer dispatched Italian Andreas Seppi 6-1, 6-4, while Wawrinka ended the run of Spanish qualifier Pablo Carreno-Busta as the second seed posted a 6-3, 3-6, 6-1 win in a match marred by complaints about on-court coaching from the Spaniard's box. 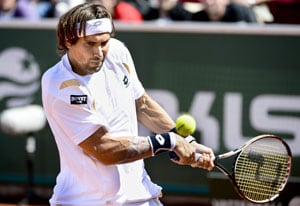 Spain's David Ferrer will play his 37th final when he and Swiss Stanislas Wawrinka line up Sunday for the clay title at the Portugal Open.

The top seed dispatched Italian Andreas Seppi 6-1, 6-4 in 70 minutes while Wawrinka ended the run of Spanish qualifier Pablo Carreno-Busta as the second seed posted a 6-3, 3-6, 6-1 win in a match marred by complaints about on-court coaching from the Spaniard's box.

The third seed, coached by former Swiss great Martina Hingis, earned the fifth title of her career while leaving her opponent winless from five finals.

Ferrer was the picture of efficiency in his defeat of Seppi, with the Spaniard now in the hunt for his 21st career trophy.

"It's good to get to the final here, I've always dreamed of winning this title, there is so much history at this tournament," said Ferrer, who leads the ATP this season with match wins on 28 with Novak Djokovic and Rafael Nadal trailing on 26.

Ferrer stands 5-0 over Seppi, who didn't hold his serve until the second set.

The Spaniard has won two titles already this season in New Zealand and Argentina.

Wawrinka, ranked 16th, complained to the chair umpire near the end of his second set against Carreno-Busta over what he said was coaching of his 228th-ranked, 21-year-old opponent.

"It was not the first time, it happened for him against (Fabio) Fognini (quarter-finals).

"He and his coach were speaking a lot during the match.

"That's not what it should be like, it's not in the rules. That's why I spoke to the chair."

Carreno-Busta has had a solid run on the lower-level Futures and Challenger circuits and has won an amazing 50 matches already this season.

He was playing his first semi-final at the ATP level at his fourth tour-level event.

Pavlyuchenkova has been working with Hingis officially for just a few weeks and the game style and fighting determination of Switzerland's five-time Grand Slam champion may be rubbing off on the 21-year-old right-hander.

"She was really happy with the win," said Pavlyuchenkova of her mentor's first win as a coach.

The winner was less than thrilled with a slow start to her own game.

"I was pissed with the way I started. But then I relaxed, and started waiting for my chances after she had pinned me to the baseline.

"I was trying to dictate and wait for the right moment. It worked at the end."

Pavlyuchenkova was flying straight to Spain later Saturday for a first-round start at the Madrid Masters against world number three Victoria Azarenka, who has not played for more than a month due to injury and has yet to step on to clay.

"It's a really tough draw, but for both of us. She's not played for a while and I already have some events on clay.

"I can't say what will happen but I'll try my best. I won't be scared, that's for sure. I'll just go out there and try to make her play."

Pavlyuchenkova now owns five career titles, including two this season after winning the Monterrey event for a third time.