Hard-serving Lukas fired 31 aces in the match to record his sixth Davis Cup win. The 63rd-ranked Czech landed his 15th ace to prevail on a first-set tiebreaker and his 30th to win the third set. 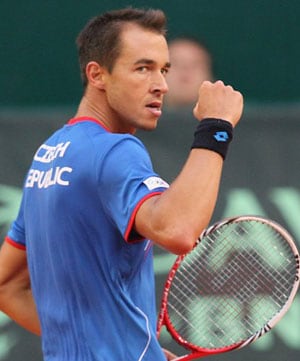 Defending champion Czech Republic beat Kazakhstan to advance to the Davis Cup semifinals with a match to spare on Sunday.

But Kazakhstan cut the lead when Golubev paired with Yuriy Schukin to beat Radek Stepanek and Hajek.

Kazakhstan beat the Czechs in 2011, upsetting the hosts 3-2 in the first round of the World Group.

"We are happy that it was over in the fourth match," Czech captain Jaroslav Navratil said. "It was a big achievement to beat Kazakhstan on their home turf."

Hard-serving Lukas fired 31 aces in the match to record his sixth Davis Cup win. The 63rd-ranked Czech landed his 15th ace to prevail on a first-set tiebreaker and his 30th to win the third set.

Korolev, who substituted for the originally nominated Kukushkin, was the first to break in the second and third sets, but Rosol broke back in both to force tiebreakers. Rosol dominated the fourth set, breaking Korolev two times. Rosol closed the match with a backhand shot down the line on his first match point.

"It was a very tough match. Evgeny (Korolev) played good tennis and kept me in anxiety through the entire match," Rosol said. "But the scoreline is on the scoreboard."

The Czechs were without sixth-ranked Tomas Berdych, who was sidelined with a shoulder injury, while Stepanek, who underwent neck surgery in January, was rested from the opening singles. He could have faced Golubev in the fifth match, but both teams agreed not to play it.

The Czech Republic beat Spain last year for its first title since 1980. It will host Argentina or travel to France in the semifinals in September.

Comments
Topics mentioned in this article
Tennis Lyon Argentina Costa Rica Czech Republic Greece Romania France Rafael Nadal Lukas Rosol Evgeny Korolev
Get the latest updates on IPL 2020, check out the IPL Schedule for 2020 and Indian Premier League (IPL) Cricket live score . Like us on Facebook or follow us on Twitter for more sports updates. You can also download the NDTV Cricket app for Android or iOS.