Australian Open champion Kim Clijsters advanced to the semifinals of the Brisbane International with a 6-3, 6-2 win over Iveta Benesova on Thursday. 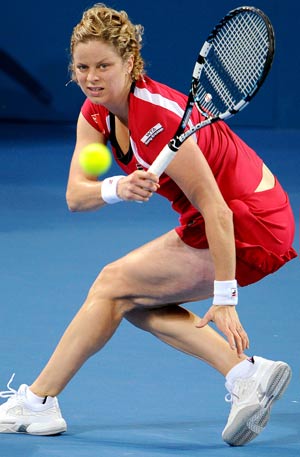 Australian Open champion Kim Clijsters advanced to the semifinals of the Brisbane International with a 6-3, 6-2 win over Iveta Benesova on Thursday.

Clijsters won the Brisbane title in 2010 and, after missing the 2011 edition, now has an 8-0 record in the Australian Open tuneup.

She raced to a 5-0 lead before Benesova, who ousted U.S. Open champion Sam Stosur in the second round, launched a comeback with a run of three straight games.

Benesova held her opening serve and had an early break-point chance in the second set before Clijsters shifted up a gear and dominated the remainder of the match to earn a semifinal meeting against Daniela Hantuchova, who got a walkover in the quarterfinals when 13-time Grand Slam winner Serena Williams withdrew from the tournament on Wednesday after injuring her left ankle.

Clijsters had a tough three-set win over Ana Ivanovic in the second round but didn't let Benesova get too close in the quarterfinals.

"I'm very satisfied with the way that I played," Clijsters said. "In my previous match I lost my focus a bit. I was really focussed on not letting that happen today."

Third-seeded Francesca Schiavone will meet Kaia Kanepi of Estonia in the other women's semifinal.

The 2010 French Open winner saved match points on her serve in the 12th game of the second set and then, after winning the tiebreaker and going down a break in the third set, won the last five games to clinch a quarterfinal berth in just under three hours on her third match point.

"I just played really bad in the first set," Petkovic said. "My footwork was very sloppy, and afterwards I started moving a little better, but when somebody is hitting as hard as Kaia - and she was serving incredible - then you really have to be on point with your footwork.

"She played really, really well and I have to say, if she keeps playing like this she'll be a force."

In the men's draw, second-seeded Gilles Simon of France advanced with a 7-6 (2), 6-4 win over Santiago Giraldo of Colombia.

Simon will next play either Alexandr Dolgopolov of Russia or former champion Radek Stepanek of Czech Republic.

Comments
Topics mentioned in this article
Iveta Benesova Andy Murray Tennis Kim Clijsters
Get the latest updates on IPL 2020, check out the IPL Schedule for 2020 and Indian Premier League (IPL) Cricket live score . Like us on Facebook or follow us on Twitter for more sports updates. You can also download the NDTV Cricket app for Android or iOS.