Australian Samantha Stosur, the reigning US Open champion, worked for 2 1/2 hours Tuesday before finally overcoming Anabel Medina Garrigues of 6-3, 6-7 (6/8), 6-4 to reach the third round at the ATP and WTA Cincinnati Masters hardcourt tournament. 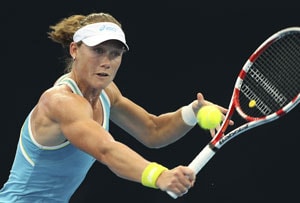 Australian Samantha Stosur, the reigning US Open champion, worked for 2 1/2 hours Tuesday before finally overcoming Anabel Medina Garrigues of 6-3, 6-7 (6/8), 6-4 to reach the third round at the ATP and WTA Cincinnati Masters hardcourt tournament.

"That's a good feeling when you feel the crowd is behind you and willing you on to try and, you know, play a little bit better and hopefully win the match," Stosur said.

"Myself, and I'm sure a lot of the other players, are still trying to find that timing from being on the grass for so long -- on good hard courts with the ball bouncing up, and it's really quite light through the air.

"I guess I'll find out more when I lay down in bed how achey and sore I am. I played some long matches lately and pulled up well. Hopefully this will be no different."

"All of a sudden you get to an America and obviously there is that hype and we have the big leadup tournaments," she said.

"Everyone is talking about the US Open again. I feel like it has come by pretty fast. Always going to look forward to going back there the year after you win for sure."

The top-seeded Swiss, going for a fourth trophy in the US Midwest, still has to win his opening encounter Wednesday against Alex Bogomolov of Russia.

But German-born 19-year-old Tomic, who advanced with seven aces, saved all six break points he faced and finds the challenge is still inviting.

"If I get the chance to play Roger, It will be very interesting," said the World No. 49, the only teen in the top 50. "I played him in the Australian Open fourth round and learned a lot from that match.

"I'm improving my game and getting stronger. People expect a lot from you and you have to keep working hard. But I think mine is paying off.

"I've still got a few more years to reach the peak of my game."

Comments
Topics mentioned in this article
Tennis David Nalbandian Roger Federer Andy Murray Juan Martin del Potro Andy Roddick Serena Williams Samantha Stosur Ana Ivanovic
Get the latest updates on ICC T20 Worldcup 2022 and CWG 2022 check out the Schedule, Live Score and Medals Tally. Like us on Facebook or follow us on Twitter for more sports updates. You can also download the NDTV Cricket app for Android or iOS.