The 20-year old 217-ranked Bhambri had his chances, especially in the first set when he held breakpoints against Haase who himself allowed the Indian to hold serve in the third game after leading 40-0. 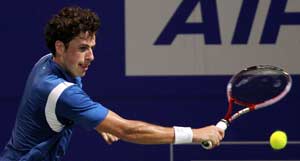 The 20-year old 217-ranked Bhambri had his chances, especially in the first set when he held breakpoints against Haase who himself allowed the Indian to hold serve in the third game after leading 40-0.

Haase, the 25-year old ranked 56, also survived a breakpoint in the fourth as games went with serve until the tall Dutchman made a crucial break of serve in the 11th game to wrap up the first set.

In the second set, Haase looked the more settled player as he won his service games with relative ease while Bhambri struggled to hold and the Delhi-based youngster was lucky to survive three breakpoints in the fourth game.

Haase then broke Bhambri in the eighth game with the Indian committing a couple of errors and the Dutchman went 5-3 before serving out the set for the match that lasted an hour and 25 minutes.

Bhambri served well enough as he sent down eight aces to Haase's four, but was not consistent enough to trouble the Dutchman whose game was also built around solid groundstrokes besides the serve.

To Bhambri's credit, he fought as well as he could, but yielded ground to the the superior all-round play of the Dutch star who was voted "ATP Comeback Player of the Year" in 2010 when he jumped from 447 to 65 in rankings after returning from a 10-month break following a knee surgery.

Haase will next take on unseeded Aljaz Bedene from Slovenia who brushed aside Portugal's Joao Sousa 6-3, 6-2, on an outside court.

The 28-year old Saeda, ranked 58 and a semi-finalist here in the 2012 edition, was just too good for the error prone Donskoy to record a comfortable win.

On the outside court, American-born Prakash Amritraj ousted Britain's James Ward 5-7, 6-4, 6-4 to qualify for the singles main draw along with German Cedrik-Marcel Stebe, Belgian Reuben Bemelans and American Rajiv Ram.

Comments
Topics mentioned in this article
Tennis Vijay Amritraj Xavier Malisse Juan Monaco Rafael Nadal Robin Haase Divij Sharan Yuki Bhambri Vishnu Vardhan
Get the latest updates on ICC T20 Worldcup 2022 and CWG 2022 check out the Schedule, Live Score and Medals Tally. Like us on Facebook or follow us on Twitter for more sports updates. You can also download the NDTV Cricket app for Android or iOS.