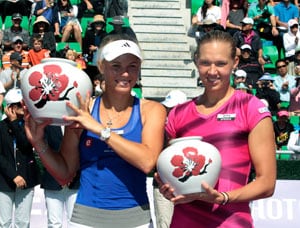 Wozniacki from Denmark needed only about one hour to defeat the third-seeded Kanepi of Estonia to win the tournament on Seoul's Olympic Park hard courts. It was Wozniacki's 19th career WTA victory.

She defeated Ekaterina Makarova of Russia 6-1, 5-7, 6-4 in the semifinals while Kanepi advanced the finals after beating Varvara Lepchenko of the United States 6-4, 2-6, 6-4.

Comments
Topics mentioned in this article
Kaia Kanepi Tennis Caroline Wozniacki
Get the latest updates on IPL 2021, check out the IPL 2021 Schedule and Indian Premier League Live Score . Like us on Facebook or follow us on Twitter for more sports updates. You can also download the NDTV Cricket app for Android or iOS.