The 32-year-old Swiss star is not suddenly turning to a serve-volley mindset, but he did venture to the net with good effect in his second-round match against Nieminen as he honed certain parts of his game. 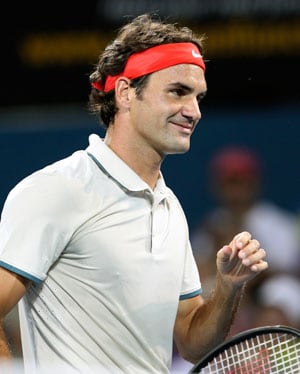 Roger Federer showed shreds of Stefan Edberg's influence as he got his 2014 season underway, advancing to the Brisbane International quarterfinals with a 6-4, 6-2 win over Jarkko Nieminen on Wednesday.

Federer worked briefly with Edberg in the off-season and will again use the six-time major winner as a coach in Melbourne as he tries to end his Grand Slam drought at the Australian Open this month.

The 32-year-old Swiss star is not suddenly turning to a serve-volley mindset, but he did venture to the net with good effect in his second-round match against Nieminen as he honed certain parts of his game.

"I've been serving OK, my forehand is going well, my movement is OK, I'm seeing the ball OK," said Federer, who won the last of his 17 Grand Slam titles at Wimbledon in 2012. "I expect to play a bit better in the next match, even though today was already very good for a first match in so many weeks."

After a day of injury withdrawals in the women's draw, No. 2-ranked Victoria Azarenka finished off the night session with a 6-3, 6-1 win over Casey Dellacqua.

Federer, in the decisive game of the first set, rallied from 40-0 down and won the next five points to break for a 3-2 lead. He started with a pinpoint lob that caught the baseline and followed it up with a sharp, angled volley that turned the momentum.

He broke serve twice in the first three games of the second set and cruised to a comfortable win.

Awaiting top-seeded Federer in the quarterfinals is Australia's Marinko Matosevic, who beat American Sam Querrey 5-7, 7-6 (3), 6-4. Second-seeded Kei Nishikori of Japan had a 6-2, 6-2 win over Matthew Ebden to set up a quarterfinal against Marin Cilic of Croatia.

Cilic, in his second tournament following a four-month doping ban, had a 7-5, 7-5 win over fifth-seeded Grigor Dimitrov, a Brisbane finalist last year.

Cilic, who reached a career-high No. 9 in 2010 but finished last season at No. 37, said playing again "feels like a new beginning for me."

"I'm thinking about everything around myself in a different perspective," he said. "I'm excited to be in the season and to play, to be back on the tour after all that misery last year."

Azarenka's match was the only women's second-rounder to go the distance Wednesday. She'll next play Stefanie Voegele of Switzerland, who advanced when Wimbledon finalist Sabine Lisicki forfeited due to a stomach illness.

Maria Sharapova got a walkover into the quarterfinals when Australian teenager Ashleigh Barty withdrew and fifth-seeded Angelique Kerber progressed when Anastasia Pavlyuchenkova of Russia retired in the second set with a left leg injury. Kerber was leading 6-2, 4-3 against last year's runner-up.

Caroline Wozniacki, who withdrew ahead of the Brisbane tournament after injuring her shoulder in practice, confirmed her engagement to golf star Rory McIlroy earlier Wednesday, posting photos of the couple and the ring on Twitter.

It was no surprise to Azarenka, who said she'd predicted the engagement last year at the Brisbane International.

"I'm really happy for her. If she will remember, I called it last year when I saw her in the locker room," Azarenka said. "I said, 'You'll be engaged by the end of the year.' Technically, I was right. I even remember the spot in the locker room where I said that. I'm a psychic!"

In the Hopman Cup at Perth, Sloane Stephens beat Alize Cornet 7-5, 6-0 to give the United States a 1-0 lead against France, with John Isner playing Jo-Wilfried Tsonga in the men's singles.

At Auckland, New Zealand, former world No. 1s Venus Williams and Ana Ivanovic moved closer to a semifinal meeting when they won second-round matches at the WTA's ASB Classic.

Comments
Topics mentioned in this article
Roger Federer Stanislas Wawrinka David Ferrer Kim Clijsters Rafael Nadal Andy Murray Bernard Tomic Novak Djokovic Tennis
Get the latest updates on India vs Australia Series, check out the India vs Australia Schedule for 2020-21 and Ind vs Aus live score . Like us on Facebook or follow us on Twitter for more sports updates. You can also download the NDTV Cricket app for Android or iOS.