Jarkko Nieminen defeated James Blake 7-6 (5), 5-7, 6-2 Saturday to reach the Stockholm Open final for the third time in his career. 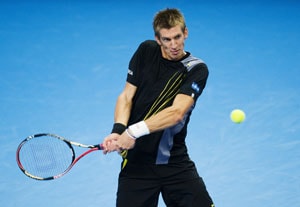 Jarkko Nieminen defeated James Blake 7-6 (5), 5-7, 6-2 Saturday to reach the Stockholm Open final for the third time in his career.

Blake had seven double-faults and struggled with his serve throughout the match. He upset 15th-ranked Juan Martin Del Potro before getting a walkover into the semifinal after David Nalbandian pulled out with injury,

Nieminen scored three of his five break points in the final set. The 73rd-ranked Finn will get a third chance to pick up his first title at the Royal Tennis Hall. He reached the final in 2001 and 2006.

Top-seeded Gael Monfils of France will face Milos Raonic of Canada in the other semifinal.

Comments
Topics mentioned in this article
Jarkko Nieminen Tennis James Blake
Get the latest Cricket news, check out the India cricket schedule, Cricket live score . Like us on Facebook or follow us on Twitter for more sports updates. You can also download the NDTV Cricket app for Android or iOS.