World number five Agnieszka Radwanska was stunned 7-5, 6-2 and it was first time since 1998 that the women's titleholder has lost her opening match in Sydney. 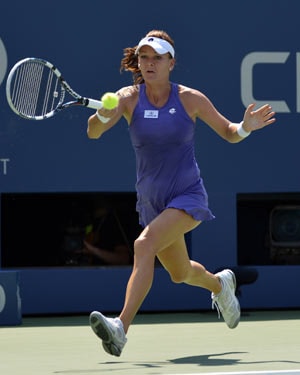 Mattek-Sands, ranked 48, upset the world number five 7-5, 6-2 in just over 90 minutes to disrupt Radwanska's lead-up to next week's Australian Open in Melbourne.

Radwanska's defeat was the first time since 1998 that the women's titleholder has lost her opening match in Sydney. "She was really playing aggressive today. It didn't matter if it was my first serve, second serve, or anything, she was really going 100 percent for every ball," Radwanska said.

Former Wimbledon champion Petra Kvitova is the highest seed left in the draw after ousting American Christina McHale for the loss of just one game. Kvitova will next play Czech Lucie Safarova, who eliminated Danish sixth seed Caroline Wozniacki 6-4, 7-6 (9/7).

Radwanska, who will now head to Melbourne ahead of the Open, said she did not think the early loss would upset her preparations. "I had a lot of good matches last week (in the Hopman Cup)," she said.

"It's not like I'm playing bad. I'm not worried about that. I just think it's not my day."

The former Wimbledon runner-up has not won a match or even a set since last October, after losing all three of her round-robin encounters at the season-ending WTA championships in straight sets.

Radwanska's losing run is a stark contrast to last year, when she went into the Australian Open on a nine-match winning streak after picking up back-to-back titles in Auckland and Sydney.

China's Li Na ended her winning sequence at 13 with victory over Radwanska in the Australian Open quarter-finals. Mattek-Sands now has a quarter-final against fellow American Madison Keys, who ousted Croatian wildcard Ajla Tomljanovic in three sets.

"I've played her a couple times and I've never beaten her, so it's probably one of the best wins of my career," Mattek-Sands said of her upset triumph over Radwanska.

German fifth seed Angelique Kerber is also through to the tournament's last eight, where she will meet Spain's Carla Suarez Navarro after ousting Estonian Kaia Kanepi 6-3, 6-4 in her second-round match.

Comments
Topics mentioned in this article
Tennis Agnieszka Radwanska Bethanie Mattek-Sands
Get the latest updates on IPL 2021, IPL Points Table , IPL Schedule 2021 , live score . Like us on Facebook or follow us on Twitter for more sports updates. You can also download the NDTV Cricket app for Android or iOS.