Back injury forces Kirilenko to withdraw from Korea Open

A back injury forced former champion Maria Kirilenko of Russia to withdraw from a first-round match of the Korea Open on Wednesday. 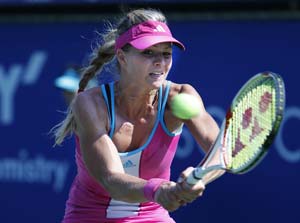 A back injury forced former champion Maria Kirilenko of Russia to withdraw from a first-round match of the Korea Open on Wednesday.

Kirilenko, ranked 14th and seeded second, said she hurt her back in practice and aggravated it in her opening match, which lasted only two games, against South Korean wild card Lee So-ra.

Third-seeded Kaia Kanepi of Estonia beat Galina Voskoboeva of Kazakhstan 6-2, 6-2, to reach the quarterfinals in her first tournament since the French Open.

Kanepi was coming back from a bilateral Achilles injury.

Kiki Bertens of the Netherlands made her first appearance in the last eight since she won her first title in April in Fez, Morocco, overcoming Silvia Soler-Espinosa of Spain 1-6, 7-6 (3), 6-2.

Comments
Topics mentioned in this article
Tennis Maria Kirilenko
Get the latest Cricket news, check out the India cricket schedule, Cricket live score . Like us on Facebook or follow us on Twitter for more sports updates. You can also download the NDTV Cricket app for Android or iOS.