Mona Barthel of Germany fought Australian Open champion and No. 1 Victoria Azarenka for 3 hours before finally losing 6-4, 6-7 (4), 7-6 (6) in the second round of the BNP Paribas Open on Friday. 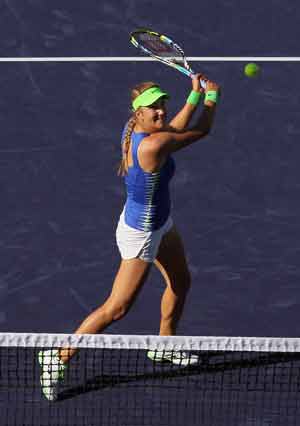 Mona Barthel of Germany fought Australian Open champion and No. 1 Victoria Azarenka for 3 hours before finally losing 6-4, 6-7 (4), 7-6 (6) in the second round of the BNP Paribas Open on Friday.

Azarenka was up 5-1 in the second set at the Indian Wells Tennis Garden before the 21-year-old Barthel held serve and began to play almost flawless tennis. She won five games in a row before Azarenka held serve to force a tiebreaker. Azarenka lost the final three points of that tiebreaker, then trailed in the third set 4-1 after losing serve with three straight double faults, but she won the next two games.

Barthel cashed in her third break point on Azarenka's serve to go up 6-5, only to play an extremely loose game and lose serve to set up the tiebreak. The 12-point tiebreaker was more of the same. Azarenka went up 3-0, then double-faulted for the 12th time to make it 4-4. Azarenka went up 6-4 and Barthel got even with a service winner and a long forehand from her opponent. But at 6-6 Barthel hit a backhand return long, then lost the match with a long backhand groundstroke.

Hampton will face Jarmila Gajdosova of Australia in the third round. Gajdosova upset No. 22 seed Yanina Wickmayer of Belgium, 2-6, 6-2, 6-4.

On the men's side, U.S. teenager Denis Kudla also won, taking a 2-6, 7-6 (3), 6-4 victory over Tobias Kamke of Germany. Kamke was a last-minute fill-in for Dmitry Tursunov of Russia, who withdrew due a wrist injury.

Hampton, who last week moved into the top 100 for the first time at No. 99, had never won back-to-back matches in a WTA Tour event, and her most recent match against a top-ranked player was a 6-0, 6-1 loss to Maria Sharapova in the second round of the Australian Open.

She said that this time the experience gained in Australia and her first-round win over 38th-ranked Polona Hercog both were beneficial against Jankovic.

"I didn't really know what to expect," said Hampton. "I think the fact that I got a match under my belt here helped me a lot. In Australia I didn't have that against Maria and she wiped the court with me."

The Americans were nearly upstaged by 21-year-old

Comments
Topics mentioned in this article
Tennis Mona Barthel Victoria Azarenka
Get the latest updates on India vs Australia and check out  Schedule, Results and Live Score. Like us on Facebook or follow us on Twitter for more sports updates. You can also download the NDTV Cricket app for Android or iOS.