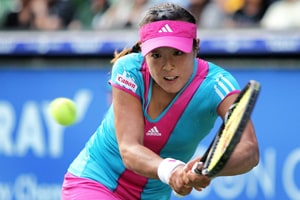 The fourth seed had to dig deep in the quarter-final before getting the better of qualifier Luksika Kumkhum. The Thai gave as good as she got before Morita stepped up through the gears to win 6-7 (7-9), 6-4, 6-1.

"I'm very happy to be in my fourth career semi-finals. I hope to continue doing my best and try to go further this time," she said.

Morita, who ranks 55 in the world, will meet 127th-ranked Karolina Pliskova of the Czech Republic in Saturday's semi-final.

The Japanese player calls Malaysia her "second home" after playing in the tournament since the inaugural event in 2010.

That year she also reached the semi-final, while in 2011 and last year she only managed to reach the last eight. Morita also got to the semis in Strausbourg and Guangzhou in 2009.

The 22-year-old said her opponent had played "very well" despite sweltering conditions in the Southeast Asian country. Rain delayed play on the first three days.

"After all the rain this week it was very hot out there. But that was the same condition for both of us," she said.

"The game was really tight in the first set, I didn't feel the ball," she said. "I played more relaxed in the second set and I just tried to fight hard for every point."

Pliskova is eyeing a double in Malaysia as she and her twin Kristyna will play Polish pair Marta Domachowska and Alicja Rosolska in the doubles semi-final later Friday.

Comments
Topics mentioned in this article
Tennis Marion Bartoli Jelena Dokic Lucie Safarova Mathilde Johansson Ayumi Morita Petra Martic
Get the latest Cricket news, check out the India cricket schedule, Cricket live score . Like us on Facebook or follow us on Twitter for more sports updates. You can also download the NDTV Cricket app for Android or iOS.