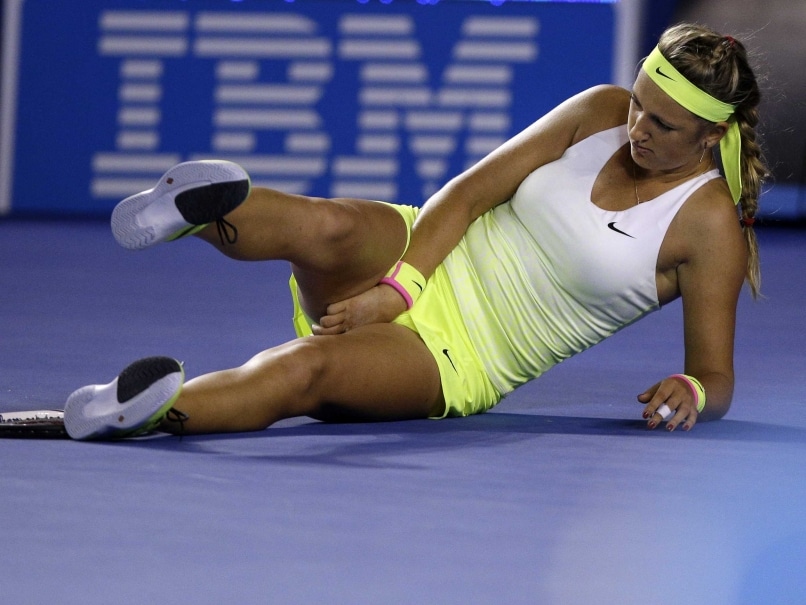 Victoria Azarenka falls to the court as she plays Dominika Cibulkova of Slovakia.© AP
Melbourne:

The Slovak defeated the unseeded Belarusian 6-2, 3-6, 6-3 to set up a last eight clash with either top seeded American Serena Williams or Spanish 24th seed Garbine Muguruza.

The 25-year-old, who lost last year's final to China's Li Na, went into the match as an underdog against Azarenka, who had defeated her seven times in their nine previous meetings.

But Cibulkova said her self belief blossomed as she stepped back onto Rd laver Arena, the scene of her best Grand Slam performance.

"I just walked on the court and all the memories came to my mind and I was just thinking 'I'm a great player, I can do it, I just have to believe in myself'," she said after the fiercly contested match.

Cibulkova had plenty to play for -- she has struggled at Grand Slams since last year's Australian Open and a loss would have sent her tumbling out of the top 20 for the first time since 2010.

Former world number one Azarenka, unseeded at Melbourne Park after returning from a horror 2014 when she struggled with injury and depression, looked shaky at times, conceding the first set with a double fault.

She switched tactics and rushed the net in the second set, also improving her serve, and reaped immediate rewards to take it 6-3 and force a decider.

The third set hung in the balance until the seventh game, when Cibulkova scored a decisive break and she went on to take the match and keep her dream of a first Grand Slam title alive.

Comments
Topics mentioned in this article
Victoria Azarenka Dominika Cibulkova Tennis
Get the latest updates on IPL 2021, IPL Points Table , IPL Schedule 2021 , live score . Like us on Facebook or follow us on Twitter for more sports updates. You can also download the NDTV Cricket app for Android or iOS.