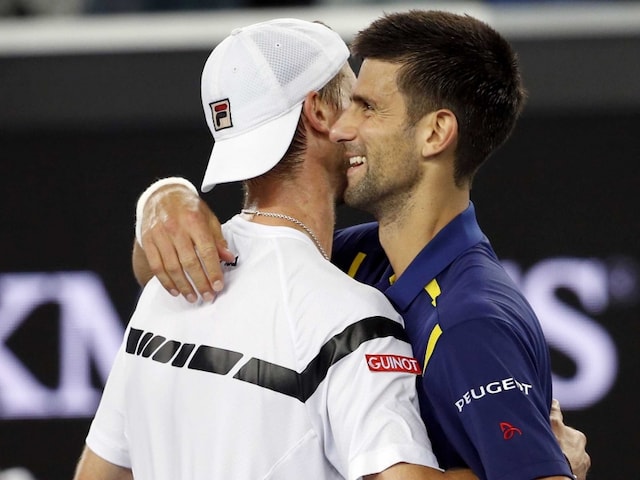 Serbian world number one Novak Djokovic extended his relentless hold over Italy's Andreas Seppi as he swept into the fourth round of the Australian Open on Friday. (Federer Makes Dimitrov His 300th Grand Slam Victim)

The 10-time Grand Slam champion survived two set points in a final set tiebreaker before completing a 6-1, 7-5, 7-6 (8/6) win and his 12th straight over Seppi, and will now play Frenchman Gilles Simon. (Nishikori Through To Fourth Round)

Djokovic has now reached the round of 16 at the Australian Open for a 10th straight year. The world's top player also holds a 33-match winning sequence against Italian opposition.

Djokovic was facing two set points in a third-set tiebreaker before he reeled off four straight points to take the match in two hours, 21 minutes. He is yet to drop a set in three rounds at the year-opening Grand Slam.

"I started the match very well with great intensity and I played some very solid tennis for the first 30-40 minutes," Djokovic said.

"He then stepped it up, he started serving well and he has a very quick game from the back of the court with a lot of depth so I backed up and did a lot of defending.

"It was very close in the last two sets and could have gone either way."

Djokovic whistled through the opening set, with two service breaks in just 25 minutes, but he encountered stiffer opposition in the following set.

The Serb top seed had a break point on his serve in the seventh before breaking the Italian in the 11th game.

Djokovic served out for a two sets lead over Seppi, who has taken just one set off Djokovic in eight hardcourt encounters.

Seppi ambushed Roger Federer at the same stage at last year's Australian Open, but the top seed was always in command on Magaret Court Arena.

Even when he was two set points down, he still found a way to reel off the final four points to take the match and advance to the last 16.

Comments
Topics mentioned in this article
Novak Djokovic Andreas Seppi Tennis
Get the latest Cricket news, check out the India cricket schedule, Cricket live score . Like us on Facebook or follow us on Twitter for more sports updates. You can also download the NDTV Cricket app for Android or iOS.