Maria Sharapova was sent crashing out of the Australian Open in a crushing defeat by Angelique Kerber Saturday as Simona Halep survived a titanic struggle to make the last 16. 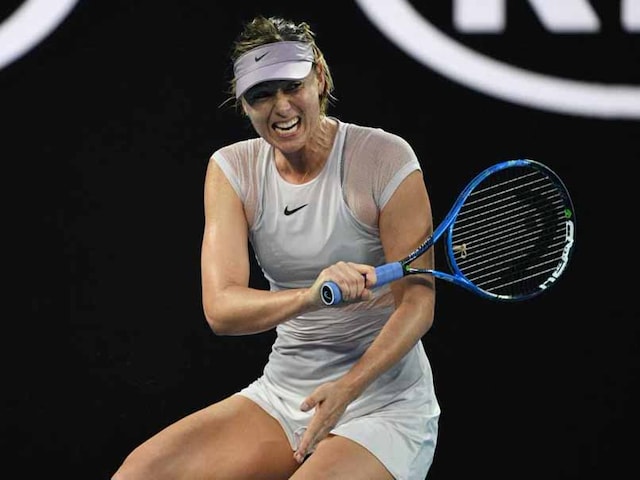 Maria Sharapova was sent crashing out of the Australian Open in a crushing defeat by Angelique Kerber Saturday as Simona Halep survived a titanic struggle to make the last 16. With the temperatures a manageable 26 Celsius (79 Farenheit) at Melbourne Park after two days of oven-like conditions, the Russian was no match for the German, flopping 6-1, 6-3 in a battle of the former champions. Fourth seed Alexander Zverev was another high-profile casualty on day six, beaten in five sets by South Korea's Chung Hyeon to continue his miserable Grand Slam form.

Sharapova and Kerber are both 30, former world number ones and the only two Australian Open winners left in the women's draw, but there was only one player in it.

"This court is special for me and I was trying to enjoy every point," Kerber said of Rod Laver Arena, where she beat Serena Williams in the 2016 final.

"I knew it would be tough, Maria is a champion, and I just tried to play my game."

Kerber is in scintillating form, having won the lead-up Sydney International, and will face either Poland's Agnieszka Radwanska or Taiwan's Hsieh Su-wei for a place in the quarter-finals.

For Sharapova, who is looking to rediscover her best on her way back from a 15-month drugs ban, it is back to the drawing board.

The same can be said for Zverev, who has been hailed as the leader of the tennis new guard but has now failed to go beyond the fourth round in 11 Grand Slams.

Halep earlier looked out for the count against 76th-ranked American Lauren Davis.

"I'm almost dead," the tenacious Romanian said after the incredible battle, in which Davis lost a toenail and Halep served for the match four times.

"The feeling in my muscles is gone and I don't feel my ankle any more," she added.

Halep, a former quarter-finalist, will next play Naomi Osaka in her quest for a maiden Grand Slam title after the Japanese star beat Australia's Ashleigh Barty.

In contrast, US Open finalist Madison Keys was in fine touch as she benefits from the guidance of former great Lindsay Davenport.

Flying under the radar, the 17th seed has surrendered just 16 games on her way to the fourth round after beating Romania's Ana Bogdan 6-3, 6-4.

"Lindsay is amazing. We've had three years together and she has taught me how to handle big moments like this," said Keys, who made the Australian Open semis in 2015.

She will next test herself against French eighth seed Caroline Garcia, who was too strong for Belarussian Alaksandra Sasnovich.

He could play Roger Federer next with the 19-time Grand Slam winner holding court in an evening match, as does Novak Djokovic.

The two greats of the game -- who have won 11 Australian Opens between them -- could meet in the last four if they maintain their winning ways.

Comments
Topics mentioned in this article
Maria Sharapova Simona Halep Angelique Kerber Alexander Zverev Tennis
Get the latest Cricket news, check out the India cricket schedule, Cricket live score . Like us on Facebook or follow us on Twitter for more sports updates. You can also download the NDTV Cricket app for Android or iOS.