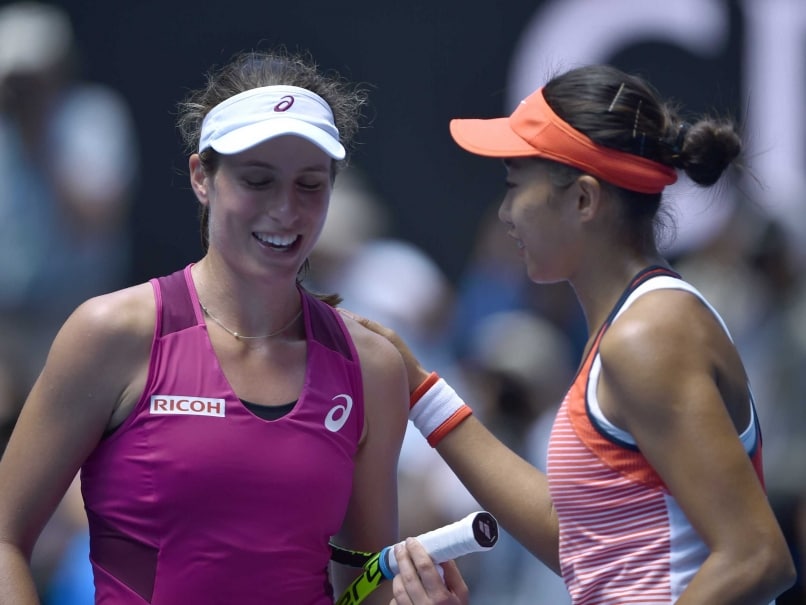 Johanna Konta became the first British woman to reach a Grand Slam semi-final since 1983 Wednesday when she ended the dream run of Chinese qualifier Shuai Zhang at the Australian Open.

The Sydney-born Konta, who came through a draining three-setter in the fourth round, recovered to oust Zhang 6-4, 6-1 and set up a last-four clash against German seventh seed Angelique Kerber.

The 24-year-old Konta, who has blossomed in the last year, had never been beyond the fourth round at a Slam before but she now equals fellow Brits Virginia Wade (1972, en route to the title) and Sue Barker (1975 and 1977) in making the Melbourne semis.

In her Australian Open debut, she also became the first British woman to reach a semi-final at any of the Grand Slam tournament since since Jo Durie at the US Open in 1983.

"She didn't make it easy," an ecstatic Konta said of Zhang. "I'm happy. I was able to fight every single point.

"I didn't put anything on this match, I just wanted to come out and play the best level that I could, and give the best entertainment I could."

This time last year Konta was ranked 147 and fell in qualifying for Melbourne Park, but she has since risen 100 places, crediting her transformation with a new mental attitude.

She stunned eighth seed Venus Williams in the opening round and has stayed on a roll ever since, having more finesse and power than Zhang.

The Chinese star, who had lost all 14 of her previous Grand Slam matches before this year's tournament, was responsible for the demise of second seed Simona Halep and injured 15th seed Madison Keys. But the 27-year-old was always playing catch-up to Konta.

A pair of comfortable service holds got the match underway as the two women, who had met each other twice before, sharing the spoils, probed for weaknesses.

Konta soon put Zhang under scrutiny, claiming an early break with a bullet backhand to impose her authority.

She consolidated her lead with an ace, a smashed winner and delicate looping lob to go 3-1 in front as Zhang scrambled around the court looking for answers.

The Chinese star, ranked 133 and who nearly retired last year, disillusioned with her form, did not trouble the Konta serve until the eighth game, as the Briton served for the set.

Konta gave herself three set points but failed to bury any of them, missing routine winners as the pressure told, before sending down a double fault that gifted Zhang her first break to stay in touch at 3-5.

Sensing a way back, Zhang held her serve, emphatically with a volley, then created a break point as Konta again served for the set. But the Briton fended it off and finally took the lead on her sixth set point with a big serve.

The second set opened with a break apiece before Konta latched onto another unforced error from Zhang to go a break up, before holding serve to race 3-1 in front.

Zhang, once ranked 30 in the world, looked a spent force and was broken again in the fifth game. She fended off two match points on her serve but a double fault gave Konta a third chance, and this time the Briton made no mistake.

Comments
Topics mentioned in this article
Johanna Konta Shuai Zhang Tennis
Get the latest updates on IPL 2021, IPL Points Table , IPL Schedule 2021 , live score . Like us on Facebook or follow us on Twitter for more sports updates. You can also download the NDTV Cricket app for Android or iOS.